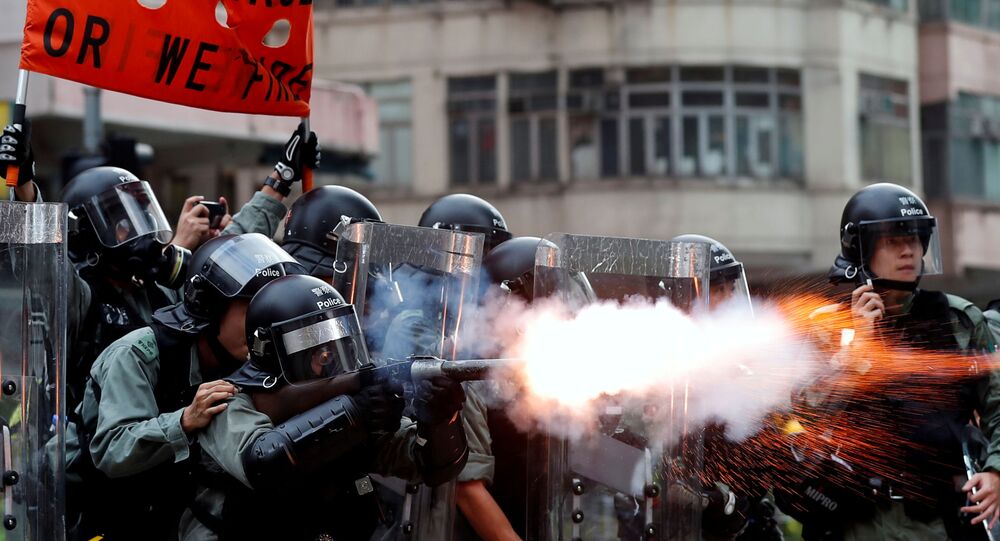 HONG KONG (Sputnik) - Tens of thousands of demonstrators have marched in the centre of Hong Kong despite a police ban and rainy weather, a Sputnik correspondent reported.

The opposition initially called for a march, but police banned it, saying that the organisers were not able to provide security at the event.

The organisers told reporters that the rally would be peaceful, saying that police would be responsible for all violent incidents at the rally.

Initially, the protesters gathered in Victoria Park. An hour later a crowd of protesters began to leave the territory of the park, flooding the streets and roads of the city.

It is currently raining heavily in Hong Kong, but this does have not deterred demonstrators.

An ambulance is let through, again. #HongKong pic.twitter.com/G9j32v0fMP

​Earlier in the day, the organisers said they expected more than 300,000 participants at the rally on Sunday.

At least three anti-riot vehicles with water cannons are currently on standby in a secret area on Hong Kong Island, a police source told the South China Morning Post.

Water cannon is a device that shoots a stream of water with high velocity. It is often deployed during protests as a means of dispersing the crowds of demonstrators. However, it can inflict serious injuries.

Participants of the rally organised by the opposition Civil Human Rights Front demand fully abandoning the law on extradition. They also call upon the authorities to stop dubbing the recent mass protests as "riots", release all detained demonstrators, start an independent investigation into police actions during protests and introduce direct general elections.

The protests in the financial hub began more than two months ago after the local legislature opened debates on a bill that would have allowed extradition to mainland China. The city’s chief executive, Carrie Lam, has since declared the bill "dead". The protesters are demanding that it must be withdrawn completely. Locals also want the city authorities to implement universal suffrage and retract criminal charges against the protesters.