Headgear, including helmets, goggles and gas masks, is quickly selling out at pop-up shops around Hong Kong as anti-extradition demonstrations continue, signaling a possible need for protesters to either reach out to other nations, or vice-versa.

Sputnik reported on Tuesday that Hong Kong residents had begun ordering bulk shipments of gas mask filters from retail 3M warehouses in Taiwan due to low supply of the inserts in the semi-autonomous city.

Now, stocks of gas masks and goggles are reportedly running at an all-time low in Hong Kong, according to AFP.

Pop-up shops such as “National Calamity Hardware,” located in the shopping districts of Mong Kok and Tai Po, have begun selling gas masks and goggles.

“We sold 50-60 sets of gas masks in the first hour of business, so we’re sold out now,” “Lee,” the 33-year-old owner of the shops, told AFP. Lee said he was an avid collector of gas masks prior to the protests, but chose to sell them because he admired the demonstrators’ bravery.

The outlet notes gas masks are currently going for $130 US (HK$1,000), but Lee claimed that he gave students a 90% discount to assist the young protesters.

“The youngsters aren’t even afraid of dying. Why should we be afraid of losing reputation and money or bankruptcy?” Lee, who uses Telegram and Facebook to advertise his merchandise, told AFP.

Clashes have continued along the streets of Hong Kong, and injuries to both protesters and the Hong Kong Police Force (HKPF) have risen and prompted the comments from leaders such as US President Donald Trump and French Foreign Minister Jean-Yves Le Drian, who called on Hong Kong authorities to renew talks toward a resolution with demonstrators.

Canadian Prime Minister Justin Trudeau also noted that he was “extremely concerned” about the escalating anti-extradition protests in Hong Kong and urged mainland China to be “very careful” and “respectful” in how it may possibly interfere in dealing with people who have “legitimate concerns in Hong Kong.”

Additional demonstrations have been taking place in public and online.

Amazon received backlash on Wednesday for allowing the online sale of merchandise related to Hong Kong’s secession from China. Though the site was hacked and threatened by Chinese nationalists, Amazon still sells a number of screen-printed t-shirts that support Hong Kong’s independence from Chinese sovereignty.

Earlier in the week, protesters armed with nothing but face masks, placards and eyepatches took to the city’s international airports and chanted “an eye for an eye.” This came as a response to Sunday footage which showed a young woman bleeding from her right eye after being shot by a HKPF officer’s beanbag rifle. 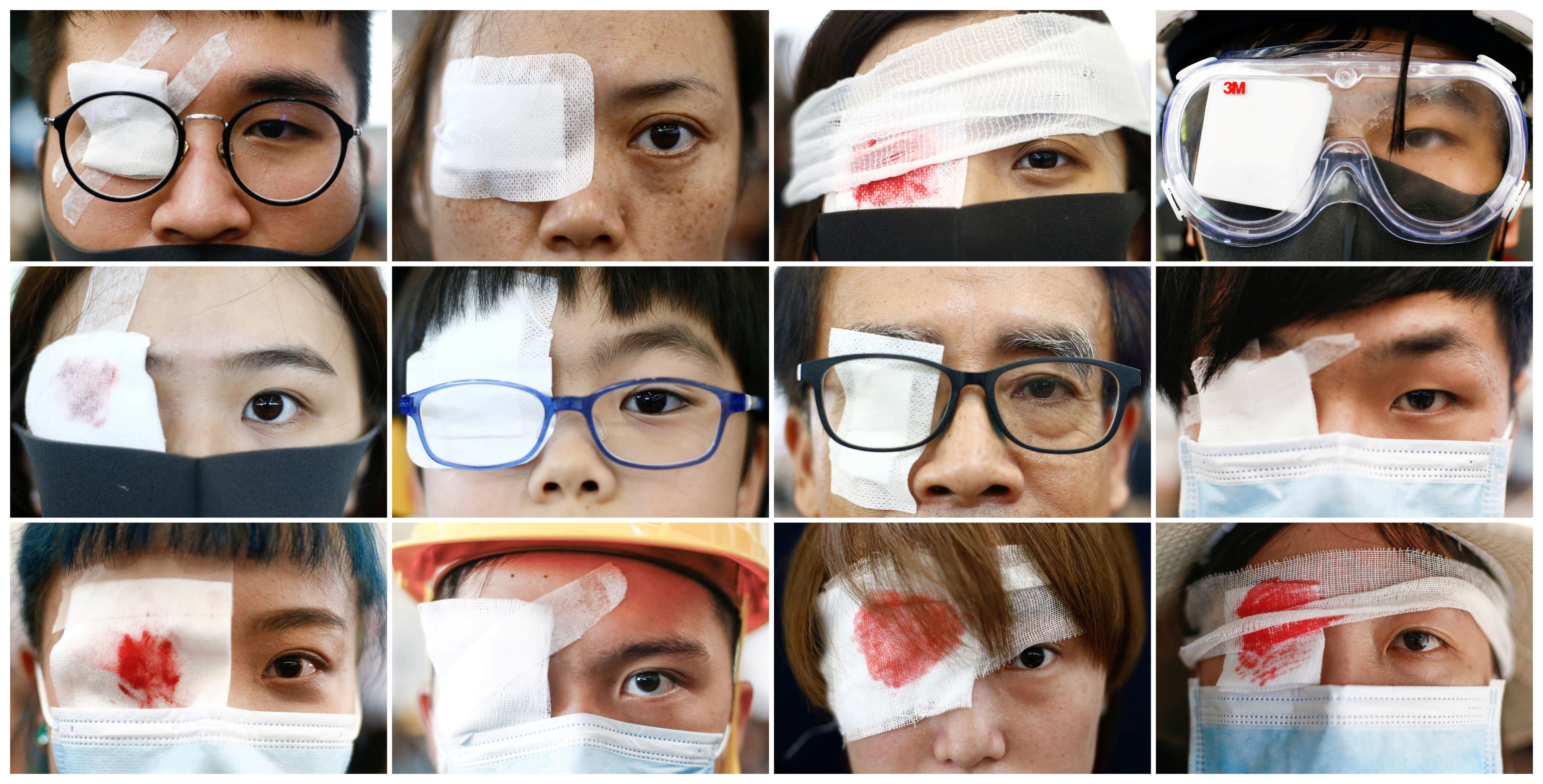 © REUTERS / Thomas Peter
A combination picture shows anti-extradition bill protesters wearing an eyepatch, in reference to a demonstrator that was injured at previous day's clashes with police during a protest inside the airport terminal in Hong Kong

The Guardian reported a statement from the victim’s sister informing the public that her sibling is “a girl who loves Hong Kong, who wants to protect her home, defend human rights and fight for freedom.” The victim allegedly underwent emergency reconstructive surgery after her eye and the bones around it were damaged.