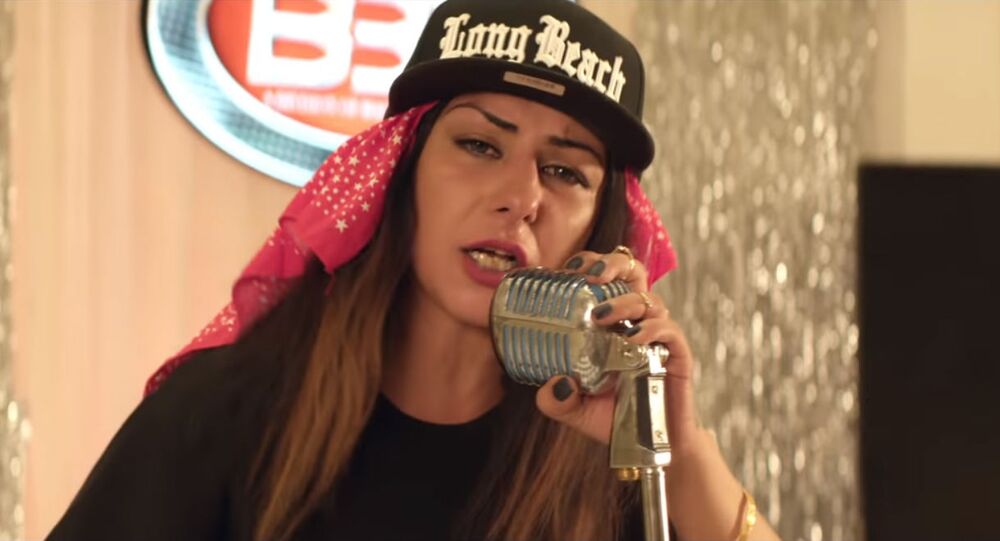 In a self-recorded video, the UK-based controversial rapper known for making provocative statements is seen standing alongside two Sikh men who dare the Government of India to stop them from hoisting their flag in 15 countries on the exact day when India raises its national flag in New Delhi to celebrate Independence Day on 15 August.

Kaur appears in the video to voice her support for the secessionist “Referendum 2020” campaign and its activists.

#HardKaur joins ISI backed Khalistanis and threatens Indian establishment. No one in bollywood should sign her, if they do, we will boycott their movies. @AmitShah @narendramodi @HMOIndia.. pic.twitter.com/hhUIXfJ0zz

As the video spread like wildfire on social media, Kaur’s justification of her support for the Khalistani group’s activities enraged Indian Twitter users.

Netizens slammed the rapper for running a proactive anti-India campaign with many suggesting that she shouldn’t be allowed back in the country.

I am sorry ... I am ashamed that I liked #HardKaur once ... I feel very bad, more so that she is a sikh/punjabi though FAKE!

This video of #HardKaur is not unexpected as we all r aware with dirty tactics of liberal gang as they don't bear peace in India ..as now problem of Kashmir is almost solved so they need a new agenda to spread their propaganda of hatred so 👉#Khalistan
pic.twitter.com/ICBUyqtUoP

This anti-nationalist #HardKaur shouldn't be allowed ever again to attend any Indian celebration ever again.

Also she should be allowed Indian Visa ever again

#UK has become the default home for all Liberal nincompoops. They feel safe there cuz they know they won’t be extradited. If she has the guts, #HardKaur say the same thing while standing in India or the UAE. Coward! https://t.co/FW8m3ioFKe

The UK-based rapper recently hit the headlines after she became a supporter of 'Sikhs for Justice' (SFJ), a US-based group that launched the Referendum 2020 movement, allegedly by request of Pakistan's ISI spy agency. It seeks a separate homeland for Sikhs -- "Khalistan" – in India.

On 20 June, rapper Kaur was charged with sedition for her objectionable social media post against Uttar Pradesh Chief Minister Yogi Adityananth and Rashtriya Swayamsevak Sangh chief Mohan Bhagwat, blaming them for the Pulwama terror attack in Jammu and Kashmir, and the 26/11 Mumbai terror attack.

She was booked under Sections 124A (sedition, attempt to excite disaffection or hatred), 153A (promoting enmity between different groups on grounds of religion), 500 (defamation) and 505 (intent to incite) of the IPC and Section 66 of the IT Act (for sending offensive messages) in New Delhi.
India's Union Cabinet on 17 July banned the 'Sikhs for Justice', a group lobbying for secessionism and promoting involvement in anti-national activities.