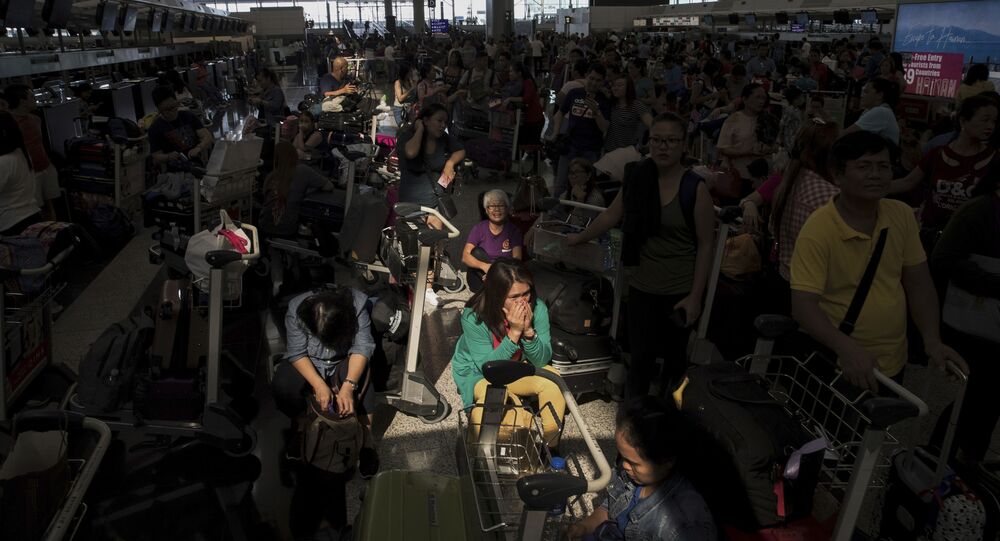 BEIJING (Sputnik) - Hundreds of anti-government protesters returned to Hong Kong International Airport on Tuesday, a day after the airport, which is one of the busiest in the world, cancelled more than 300 flights as a result of a massive sit-in, local media reported.

According to South China Morning Post, about 200 demonstrators dressed in black gathered in the arrivals hall in response to calls on the Internet to resume protests.

The airport stopped running on Monday afternoon after the departure and arrival halls were occupied by thousands of protesters opposing the city's extradition bill. Hong Kong International resumed operations on Tuesday morning, but large lines of passengers have formed in the departure hall due to the cancelled flights.

© AP Photo / Vincent Thian
An airport security staff member gestures to travelers at the Hong Kong International Airport in Hong Kong, Tuesday, Aug. 13, 2019. Protesters clogged the departure area at Hong Kong's reopened airport Tuesday, a day after they forced one of the world's busiest transport hubs to shut down entirely amid their calls for an independent inquiry into alleged police abuse.

The Civil Aviation Administration of China is taking measures to help passengers travel from Hong Kong to mainland China, including increasing the number of flights and engaging other airports in the south of the country.

People first took to the streets of Hong Kong in early June to protest the proposed passage of a bill that would allow Hong Kong to extradite suspects to jurisdictions with which it did not previously have an extradition agreement, including mainland China. Even though the government has announced that it has suspended the bill, people are demanding that it be withdrawn completely. Locals also want the city authorities to implement universal suffrage and retract criminal charges against protesters.