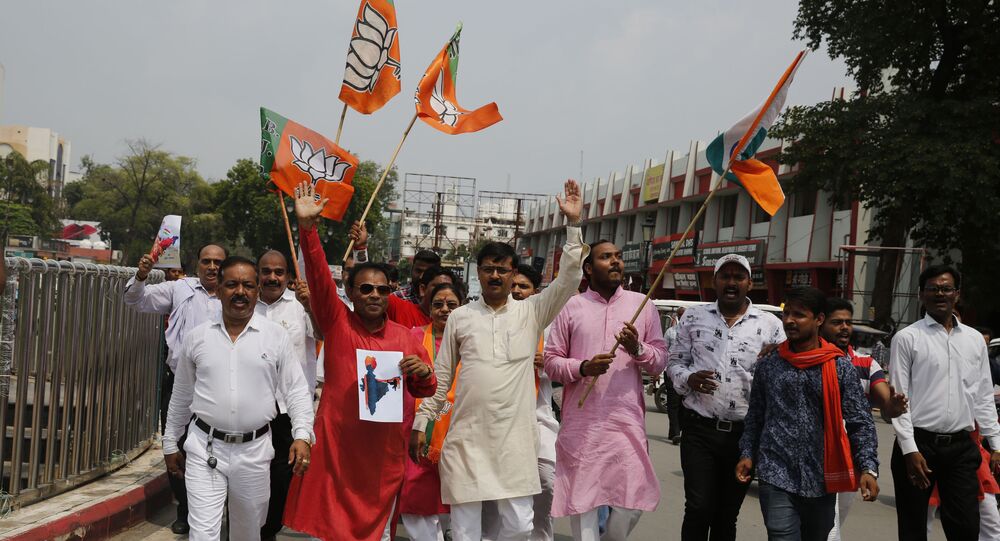 New Delhi (Sputnik): India’s opposition Congress Party leader and former Minister of Home Affairs P Chidamaram has claimed that the government would not have "snatched away" the special status of Jammu and Kashmir had it been a Hindu-dominated state.

Chidamabaram has accused Indian Prime Minister Narendra Modi of using force to abrogate Article 370 and blacking out the ground situation by snapping communication links with the state.

The former minister also said that the Congress Party would continue to fight until the status of Jammu and Kashmir was restored. “The struggle has only begun now and we will fight till the end”.

Chidambaram’s statement has sparked a major controversy and many blamed the former minister for communalising full integration of Kashmir with India.

Giriraj Singh, a minister in the Modi Cabinet, said that the comments made by Chidambaram "is for appeasement whereas the work done by Amit Shah and PM Modi has fulfilled the dreams of Sardar Patel; the people are really happy with the decision".

Indian filmmaker and social activist Ashoke Pandit, himself a Kashmiri Brahmin, lambasted Chidambaram and said: "If Hindus would have been in majority, their mass exodus wouldn’t have happened. You are the creator of my genocide Mr. Chidambaram".

The devil in action. If Hindus would have been in majority their mass exodus wouldn’t have happened. You are the creator of my genocide Mr. Chidambaram. https://t.co/JCOIOfwS1A

From the Paki TV channels and statements of politicians and Pakistani army tours it seems they consider Chidambaram, Shashi Tharoor and Congress party as their spokesmen in India. This is what Cong, the party which once defined Indian nationalism has reduced itself to.

@PChidambaram_IN seems provoking Muslims against Hindus.
Mr Chidambaram, kasmiri pandits are Hindus. We're they Muslims, they would not have been killed and driven away from their homes and live like migrants this happened in @INCIndia ruling.

There are many unguided missiles in the arsenal of @INCIndia which if launched, no one knows where will it hit, what damages will it cause, be it Adhir Ranjan, Manishankar, Sam Pitroda, Diggy, Chidambaram, Tharoor, Sidhu, Gulam Nabi or even Rahul Gandhi. #Article370Scrapped

​Earlier this month, the Indian government abrogated Article 370 of the country's Constitution that had granted special status to Jammu and Kashmir since 1947 and divided it into two federally administered territories.