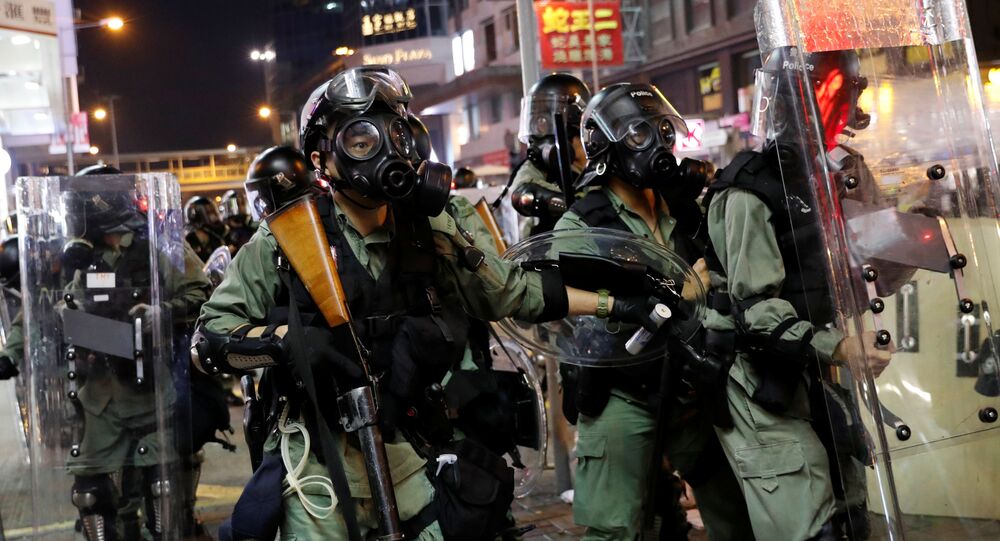 Hong Kong officials have issued a counterstatement against a professor who accused the Hong Kong Police Force of taking orders from Beijing and accepting additional officers from mainland China’s Guangdong province.

"On paper, the police in Hong Kong follow Carrie Lam's orders, but in reality, they listen to instructions from Beijing via the Liaison Office,” Cabestan said in a translated excerpt from the article. “Beijing has secretly added to the Hong Kong police force, which is 30,000-strong, a number of policemen who speak Cantonese like Hong Kong from the neighboring Guangdong province, so that they can better integrate.”

On Thursday, the professor took to his Facebook page to add that while he does not know the specifics on the number of officers now within the Hong Kong Police Force, “recent sources have indicated that it could be around 2,000.”

The government of Hong Kong slammed the professor’s claims and the surrounding rumors in a Thursday press release, saying the allegation of Beijing reinforcements was “absolutely unfounded and was a complete fabrication.” The release went on to say the “wild rumor” was intended to further fan the flames of distrust between law enforcement, the government and the public.

A number of mass protests are scheduled on the island this weekend, according to Hong Kong’s Asia Times. In particular, Hong Kong International Airport is the site of a three-day sit-in that includes hundreds of activists wearing face masks and helmets. The airport is said to have been picked as a protest location in hopes of drumming up support from international visitors.

On Friday, Lam held a news conference and announced that a “small minority” of people are destroying the city’s economy and have "no stake in a society which so many people have sought to build."

At a previous press conference on Monday, Lam noted that demonstrators were pushing the autonomous city into a “very dangerous situation.”

The Hong Kong Police Force announced earlier this week that they had used over 2,000 canisters of tear gas and fired more than 300 rubber bullets since demonstrations began on June 9. Additionally, authorities have deployed their sonic cannon-equipped Unimog armored personnel carriers and may begin spraying protesters with a dye to distinguish them from the general public. The substance can also be mixed with tear gas.