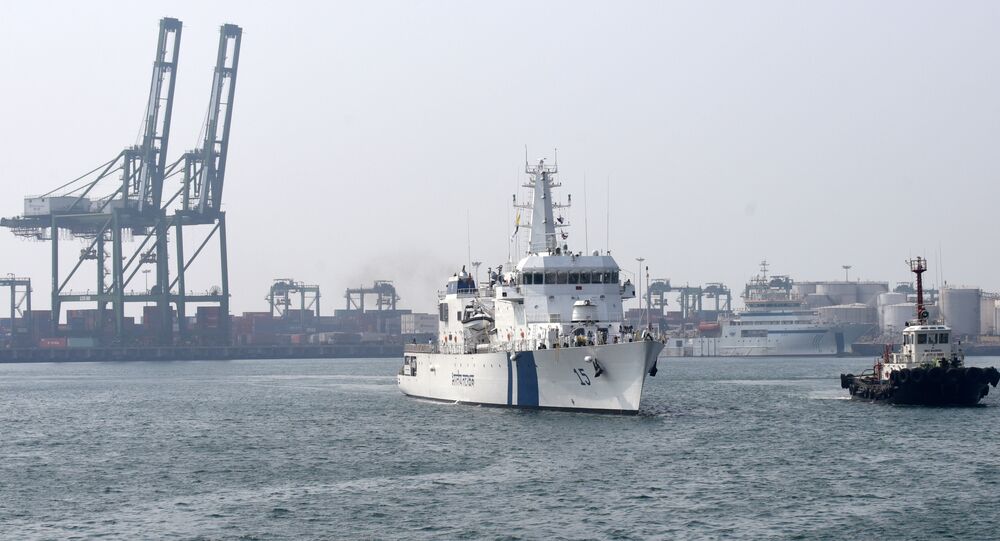 Tensions between Pakistan and India have escalated in the wake of New Delhi's decision to scrap the Jammu and Kashmir region's special status and introduce legislation to split the state in two. India has previously repeatedly accused Islamabad of harbouring terrorists that conduct attacks on Kashmir's territory.

The Indian Navy have been put on high alert over possible terror attacks that could be conducted by militants allegedly based in Pakistan, India Today TV reported, citing anonymous sources.

According to the Hindustan Times, citing an anonymous top official, the country's naval forces have tightened security measures on the eastern and western seaboards and initiated real-time monitoring of all "points of entry" along the coast.

At the same time, AFP reported, citing locals, that Indian security forces across Kashmir have been put on high alert amid fears of protests after the Friday prayers in mosques.

© AFP 2021 / SAJJAD QAYYUM
Pakistani Kashmiri lawyers shout slogans beside a burning effigy of Indian Prime Minister Narendra Modi during a protest in Muzaffarabad, the capital of Pakistan-controlled Kashmir, on August 7, 2019.

The alert comes amid escalating tensions on the Kashmir border between India and Pakistan. Following the exchange of fire at the Line of Control, with both sides blaming each other for violating the ceasefire, New Delhi scrapped Article 370 of the constitution that granted the Jammu and Kashmir region its special status and introduced legislation that was approved by the Indian parliament to separate the state into two separate entities.

These moves have drawn criticism from Pakistan, which has slammed India for allegedly not acting in the interest of the people of Jammu and Kashmir. Islamabad then degraded its diplomatic ties with Delhi, suspended trade and certain train and air links with the country, but announced that it would not resort to military action to resolve their disagreements.

© AFP 2021 / Tauseef Mustafa
Indian Border Security Force (BSF) soldiers stand guard on the top of a polling station during a second phase of elections at Kangan, some 35 km from Srinagar on April 18, 2019

The Indian Ministry of External Affairs has rejected Islamabad's criticism and advised it against meddling in the country's domestic affairs, including the revocation of Article 370.

New Delhi has repeatedly accused Pakistan of harbouring terrorists on its territory, allegations which Islamabad has denied. The Indian Air Force (IAF) strikes on alleged terrorist positions in Pakistan in February 2019 led to the downing of at least one IAF jet in a dogfight with the Pakistani Air Force and a further escalation of tensions between the countries.