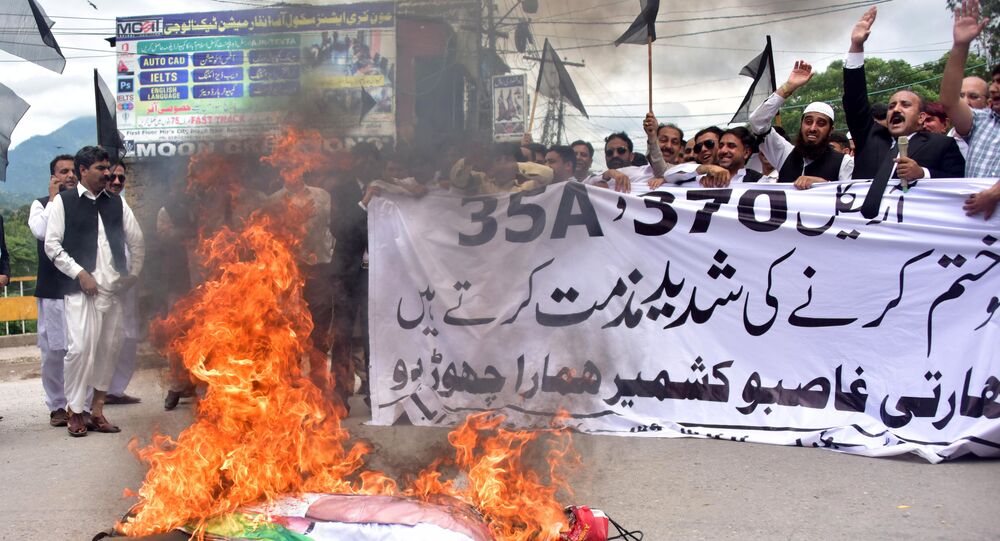 New Delhi (Sputnik): Pakistan Prime Minister Imran Khan has urged the international community to play its role in addressing the situation in Indian-administered Kashmir and help avert, what he called “genocide in Kashmir”.

Imran Khan has vowed to step up diplomatic efforts after India repealed Article 370 stripping Jammu and Kashmir of special status and dividing the state into two federally administered territories.

​Ahead of Prime Minister Narendra Modi’s telecast to the nation on Thursday 8 August, Khan tweeted that the “whole world is waiting to see what happens to oppressed Kashmiris...”.

The whole world is waiting to see what happens to oppressed Kashmiris in IOK when curfew is lifted. Does the BJP govt think by using greater military force against Kashmiris in IOK, it will stop the freedom movement? Chances are it will gain momentum.

Former Pakistan President Pervez Musharraf stated: “establishing Hindu settlements is a nefarious act to change the fabric of Kashmir from a Muslim majority to a Hindu majority.”

Establishing Hindu settlements is a nefarious act to change the fabric of Kashmir from muslim majority to hindu majority. PM Imran khan & Pak Military has set the right tone; I know they will do whatever it takes to prevent these unlawful settlements to ever become a reality. PM pic.twitter.com/dGZmfYJeEv

Former Pakistan President Pervez Musharraf and late Prime Minister Atal Behari Vajpayee held two days of parleys in Agra in northern Uttar Pradesh, and according to reports, a “solution to Kashmir was in the grasp of both governments”. President Musharraf had proposed what was called the “Four-point solution” to Kashmir, which according to different accounts was even acceptable to Vajpayee, but a final deal slipped away.