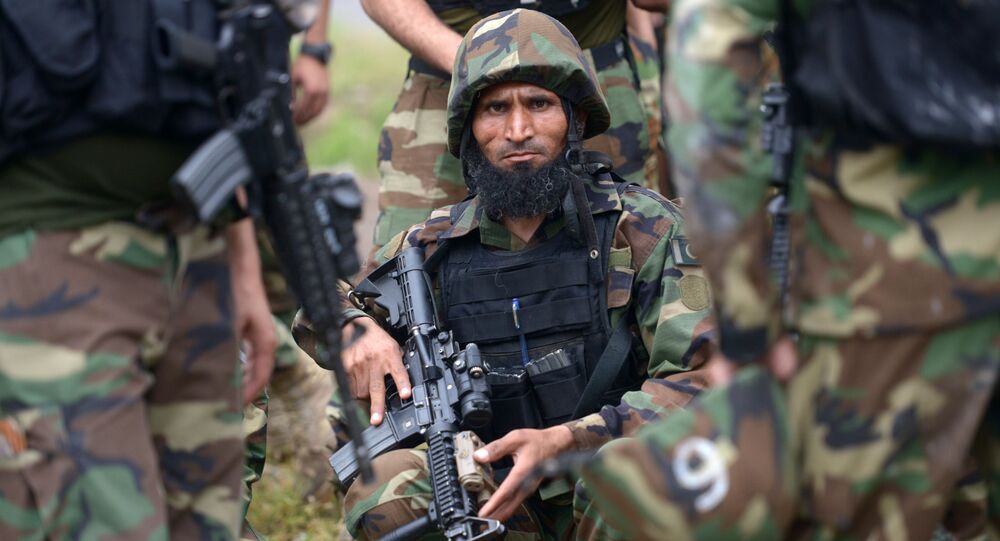 Historically hostile relations between Pakistan and India were further exacerbated earlier this week after Islamabad suspended diplomatic and trade ties with New Delhi over the latter's decision to revoke Article 370 of the Constitution which granted special status to the disputed region of Jammu and Kashmir.

Any "Indian misadventure" will be met by a response that will be "stronger than that of 27 February 2019", Director-General of Inter-Services Public Relations (ISPR) Maj. Gen. Asif Ghafoor said on Friday, alluding to the downing of an Indian warplane in a dogfight over the Line of Control (LoC).

Should there be an attempt by Indian Army to undertake any misadventure, Pakistan’s response shall be even stronger than that of 27 Feb 2019.
Thousands of Indian troops have failed to suppress just struggle of brave Kashmiris for decades. Current surge won’t succeed either.

The chief spokesperson of the Pakistan Armed Forces was responding to a tweet shared via the official account of the Chinar Corps, an infantry field formation of the Indian Army, which is responsible for military ops in the Kashmir Valley.

The tweet cited Chinar Corps Commander Lt. Gen. KJS Dhillon as claiming that Pakistan had been "openly threatening about certain incidents" in Kashmir, the apple of discord between the two nuclear-armed neighbours.

"Lately #Pak has been openly threatening about certain incidents in #Kashmir. Notwithstanding we'll take care of all of them; let anyone come & try & disrupt the peace in valley, we will have him eliminated!"- #ChinarCorpsCdr#IndianArmy #commonCausePeace @SpokespersonMoD @adgpi pic.twitter.com/uOf3ZXGGt5

The fiery exchange came on the heels of yet another escalation of tensions between India and Pakistan as New Delhi moved to scrap Article 370 of its Constitution that grants special status to the contested state of Jammu and Kashmir.

Citing the threat of cross-border terrorism, Indian Home Minister Amit Shah further announced that Jammu and Kashmir would be divided into two union territories - Jammu and Kashmir, and Ladakh, and would be brought under direct rule of the central government.

The move was blasted by Pakistan's Foreign Minister Mehmood Qureshi as a violation of a UN resolution on the status of Kashmir.

In addition, New Delhi has deployed thousands of troops to the Pakistan border to boost security in the Indian-administered part of Kashmir amid an "unprecedented escalation", according to local media.

Indian Prime Minister Narendra Modi asserted on Thursday that Article 370 had been used "as a tool by Pakistan" that allegedly fuelled "separatism, corruption, terrorism, and family rule". Islamabad, for its part, has frozen diplomatic and trade ties with India over its move.

The picturesque valley of Kashmir has been a flash point between the two South Asian giants since they both gained independence from Britain in 1947. Even though they control only parts of it, both nations have claims on the entire region. Over the past 70 years, the two states have been unable to resolve the dispute and have fought two wars in addition to sporadic exchange of fire along the de facto border.

New Delhi accused Islamabad of providing a safe haven for terrorists and retaliated by conducting an air raid on a suspected terror camp in Pakistan-administered Kashmir on 26 February that allegedly killed hundreds of terrorists and destroyed a number of facilities.

Pakistan has disputed these claims, insisting that the warplanes didn’t target any terrorist infrastructure.

On 27 February, Islamabad claimed it had downed two Indian warplanes over the LoC, and captured an Indian pilot, who was released a few days later.

New Delhi confirmed the detention of the pilot and the loss of only one of its aircraft, having, in turn, come up with a counter-claim that the IAF had brought down a Pakistan Air Force F-16. In a bid to substantiate its arguments, the Indian military displayed fragments of an AMRAAM medium-range missile recovered in the Indian-administered part of Kashmir that is alleged to have been fired by the US-made fighter jet.

The Pakistani side has vehemently denied deploying any F-16s for dogfights or sustaining any losses, with Asif Durrani, former Pakistani ambassador to Iran and the UAE, asserting that the PAF had used JF-17 Thunder, made by Pakistan and China in joint collaboration.