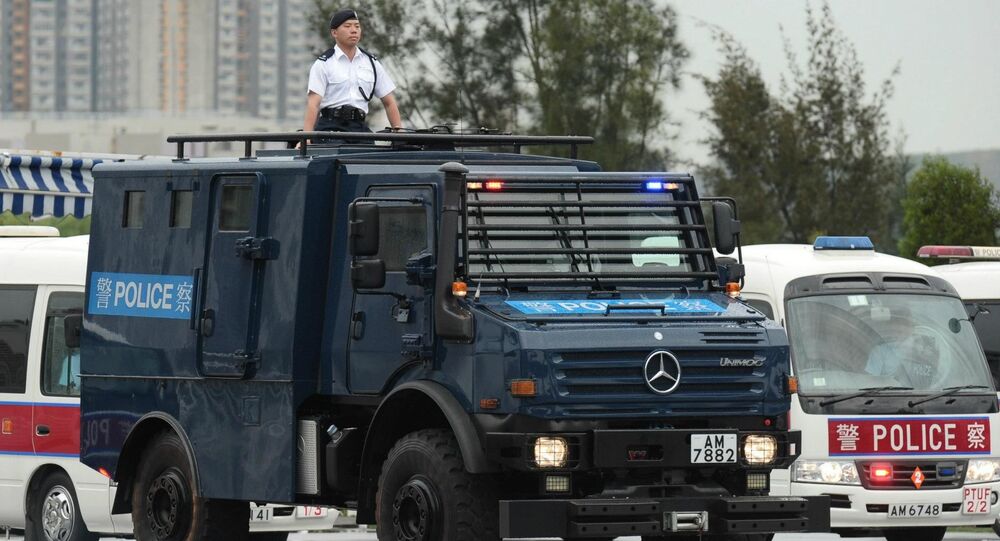 Two of the Hong Kong Police Force’s Unimog U5000 armored trucks, equipped with “sonic cannons,” were seen amidst clouds of tear gas towards the tail end of Monday night’s fierce clashes between police and anti-extradition legislation protesters in a popular Hong Kong shopping district.

The trucks, armored by the French company Centigon Security Group and sold to the force for $765,300 (HK$6 million) each in 2009, are equipped with crowd control and anti-riot gear, as well as ballistic protection.

In addition to these features and the vehicles’ noticeably high clearance for off-roading, the armored personnel carriers are also equipped with so-called “sonic cannons,” also known as Long Range Acoustic Devices, used to broadcast messages and disperse crowds.

The devices are said to have a reach of up to 300 meters, but the narrow streets and tall buildings in areas such as Mong Kok could enhance the range, as the sounds bounce off structures. Police say hearing impairment is not a possibility if the system is used properly.

Due to the area being controlled by the time of their deployment, the Unimogs’ “sonic cannons” were not used on Monday.

A police spokesperson stressed to Asia Times that despite their “sonic cannons,” the Unimog trucks are strictly defensive vehicles and would be utilized to deliver warning messages, destroy demonstrator-constructed barricades and transport injured individuals.

Prior to Monday, the PTU’s Unimogs had primarily been on display in car shows when not residing in storage or out of public sight.

In additional preparation for anticipated clashes to come, the Hong Kong Police Force announced Sunday that they now have portable spraying devices that release a staining dye onto protesters. The liquid color is meant to make protesters distinguishable from the regular public.

Around 12,000 Chinese officers were also seen participating in a massive anti-riot training session on Tuesday in the Guangdong Province city of Shenzhen, which links Hong Kong to mainland China.

Despite the timing of the training and its similarity to riot control techniques currently being used in neighboring Hong Kong, a Shenzhen police officer told the Global Times that the drills were meant to “maintain social stability, encourage the morale of police forces, and prepare the forces ahead of 70th anniversary of the founding of the People's Republic of China.”

A series of demonstrations have been held in Hong Kong since June 9 as a response to a pending extradition legislation that would allow those accused in the autonomous city to be tried in mainland China’s judicial system. As a result, over 500 individuals have been arrested, and almost 150 police officers have been injured over the past several weeks, according to remarks from Hong Kong Police Senior Superintendent Kong Wing-Cheung at a press briefing earlier this week.