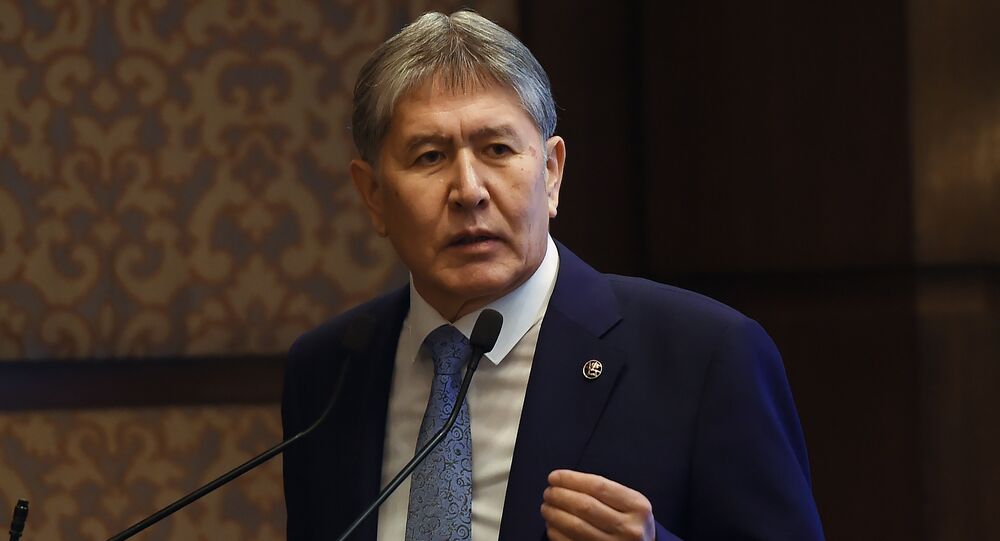 "The shooting started, he was captured at the very beginning of the assault and taken away somewhere," they said.

Sergey Slesarev, lawyer of the former Kyrgyz president Almazbek Atambayev, said the police are not letting him to enter his client's residence.

"They stopped me at the checkpoint. I can’t go further," Slesarev said.

According to Slesarev, the current whereabouts of his client is unknown to him. Atambayev's supporters earlier said that the former president had been detained by police in his residence.

About 10 people were wounded on Wednesday in clashes between police and Atambayev's supporters as special police units stormed the residence of former Kyrgyz president near Bishkek, 24.kg news portal reported.

According to the report, the wounded are being removed from the besieged compound. Police continue to use flashbang grenades against the defenders of the residence.

© AFP 2020 / VYACHESLAV OSELEDKO
In this file photo taken on June 27, 2019 Former Kyrgyz president Almazbek Atambayev stands at the entrance to his residence in the village of Koi-Tash near the capital Bishkek

Russian President Vladimir Putin has been informed about events in Kyrgyzstan related to the detention of Kyrgyz ex-president Almazbek Atambayev, he is monitoring the situation, the Kremlin’s press service said on Wednesday.

According to the press service, Putin is receiving "the most up-to-date information and monitors the situation."

Atambayev, who served as the president of Kyrgyzstan from December 2011 to November 2017, has been refusing to obey a subpoena in an unspecified criminal investigation.