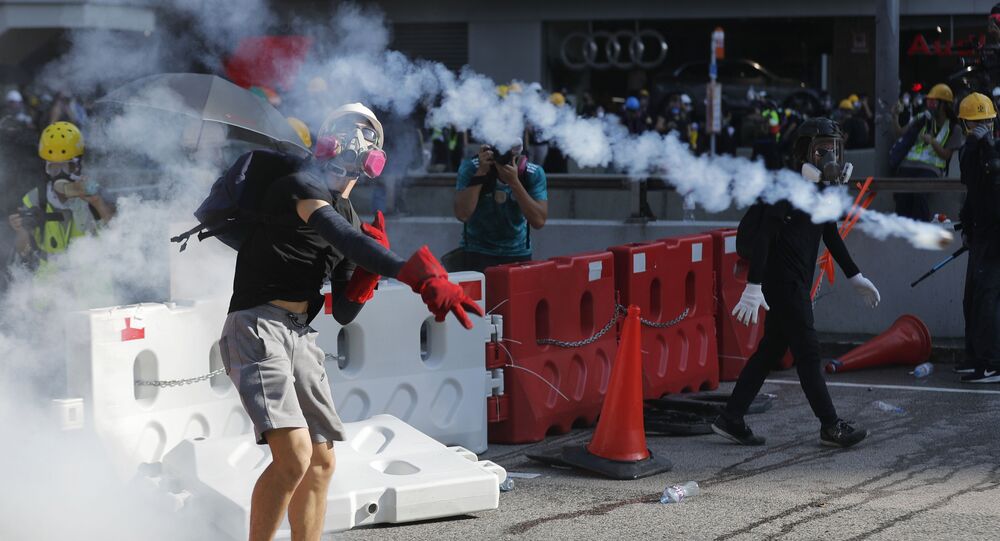 BEIJING, (Sputnik) - The city has been rocked by three months of demonstrations that began in protest against a bill that sought to allow extraditions to mainland China. The bill was suspended in an attempt to placate the crowds, but rallies have continued.

A general strike has been underway simultaneously across 20 business sectors since this afternoon. Air traffic controllers have also joined in on the action, leading to flight cancellations at the city’s airport.

Over 500 people have been arrested since protests began on June 9 and some 139 officers were injured, Senior Superintendent Kong Wing-cheung said at a press briefing, according to the South China Morning Post newspaper.

© AP Photo / Kin Cheung
A riot police fires tear gas during a confrontation with protesters on Monday, Aug. 5, 2019. Droves of protesters filled public parks and squares in several Hong Kong districts on Monday in a general strike staged on a weekday to draw more attention to their demands that the semi-autonomous Chinese city's leader resign.

Mass rallies erupted in Hong Kong in early June as the authorities were considering adopting a bill that would allow the autonomous Chinese city to extradite suspects to jurisdictions with which it did not have an extradition agreement, including mainland China.

Pressured by the protests, the government indefinitely suspended the bill, while Hong Kong Chief Executive Carrie Lam issued a public apology. However, the protesters still demand the complete withdrawal of the extradition amendments and investigations into the actions of police during previous protests.