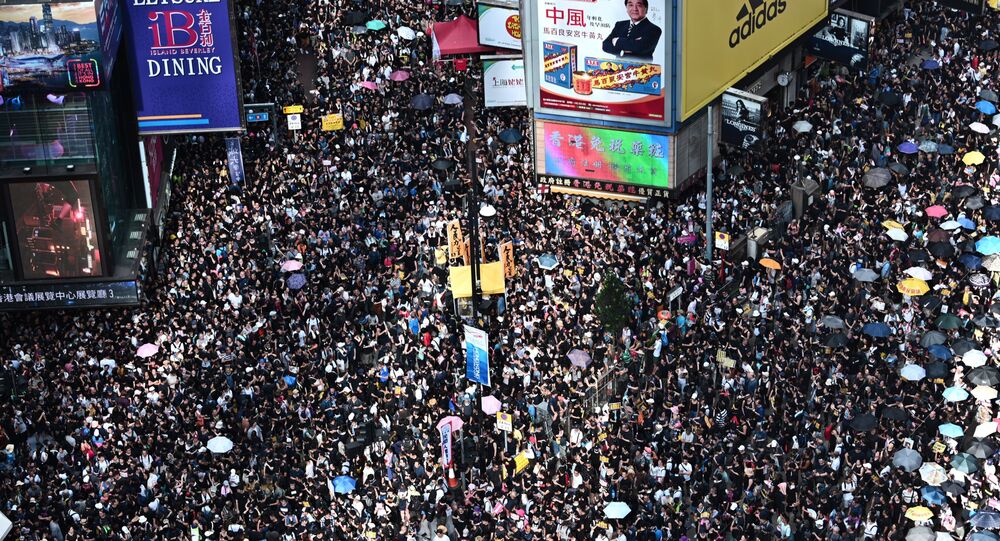 BEIJING (Sputnik) - Thousands of Hong Kong protesters against the controversial extradition bill provoked traffic havoc in a citywide strike, which is expected to bring together more than 500,000 participants, including civil servants, local media reported on Monday.

According to the South China Morning Post newspaper, protesters continued blockade of road and rail traffic on Monday to force the government comply with their demands.

The rally's organizers plan to prevent the residents from getting to work in the business districts of the city. The protests affected the work of Hong Kong International Airport, in which only one runway reportedly remains operational.

Critics of the rally say that such a large-scale disruption in all areas of business, from restaurants to aviation, will cause great damage to Hong Kong's international reputation, which used to boast its stability and world-class service.

Over the weekend, the city has seen another series of violent clashes between demonstrators and police, which culminated in the use of tear gas and multiple detentions.

Mass rallies erupted in Hong Kong in early June as the authorities were considering adopting a bill that would allow the autonomous Chinese city to extradite suspects to jurisdictions with which it did not have an extradition agreement, including mainland China.

Pressured by the protests, the government indefinitely suspended the bill, while Hong Kong Chief Executive Carrie Lam issued a public apology. However, the protesters still demand the complete withdrawal of the extradition amendments and investigations into the actions of police during previous protests.