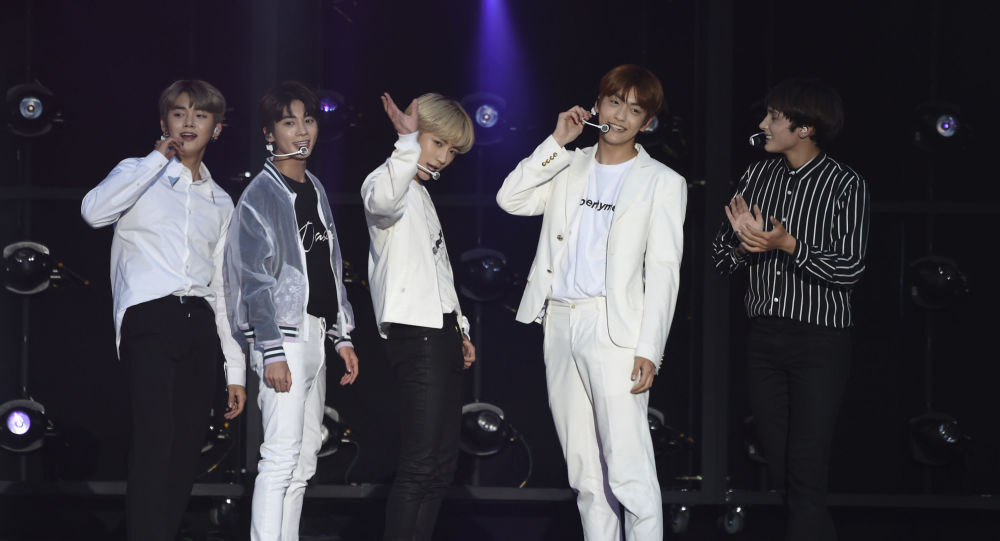 The annual Genie Music Awards ceremony currently being held at the Olympic Gymnastics Arena in Seoul is trending on Twitter as the hottest and most talented K-Pop artists gather in South Korea to receive recognition for their musical achievements.

The K-Pop group TXT (Tomorrow by Together) has won “The Male New Artist” award at the M2 X Genie Music Awards, known as MGMA, this year, amid their collaboration with M2 digital studio.

The group’s members could not hide their tears while receiving the award, as videos from the ceremony show. One of the lead singers, Yeonjun, however, was not able to enjoy the touching moment with his groupmates, as he was recovering from a “sudden back pain” and medical treatment in a hospital, reads a statement from the group’s Big Hit Entertainment agency.

Yeonjun, who is currently 20 years old, is the main rapper and dancer in the band, and was the first member to be revealed to the audience in January 2019.

His colleague, Beomgyi, nevertheless, did not forget to mention and thank his teammate– a gesture which earned him a round of applauds and joyful outcry from the audience, as well as a number of rapturous tweets.

ok but taehyun cried so hard when beomgyu mentioned yeonjun 😭 they love him so much pic.twitter.com/koZ0xCLR1S

THEY WON THE NEW MALE ARTIST AWARD
IM SO HAPPY FOR THEM
LOOK AT THEM CRYYYY OMG 😭
All three of them were crying so soobin handed the mic to hueningkai, our cute maknae & then he gave the speech! Beomgyu also thanked yeonjun becuz hes not here :(( <333 #GetWellSoonYeonjun #MGMA pic.twitter.com/5vSuclclvU

I'M FUCKING SOBBING I'VE NEVER BEEN THIS EMOTIONAL OVER ANYTHING BEFORE I'M SO PROUD OF THEM I CAN'T BELIEVE WE REALLY DID IT GOSH HOW I WISH YEONJUN WAS THERE #MGMA #TXTatMGMA @TXT_members
pic.twitter.com/nQ7wib1Coq

TXT is a five-member boy band that debuted in South Korea in March 2019. Their agency, Big Hit Entertainment, announced that the band was the quickest K-Pop group to score in the most renowned world charts, such as the Billboard’s Emerging Artists, just one week after the debut of their album “The Dream Chapter: STAR” in March 2019.

Big Hit Entertainment Agency is also home of the international K-Pop sensation Bangtan Boys (BTS), one of the first bands to bring Korean pop to the global stage with their album Love Yourself: Answer becoming the first Korean album certified Gold in the US.

BTS also won awards in all six categories they were nominated in at MGMA this year, including the “Global Popularity Award” and “The Performing Artist Male Award”. The band is known for casting their support for their “younger brothers” TXT.

The Genie Music Awards is an annual ceremony that has existed since 2018, where awards are granted through the calculation of online votes, scores from judges, social media popularity, and digital sales.