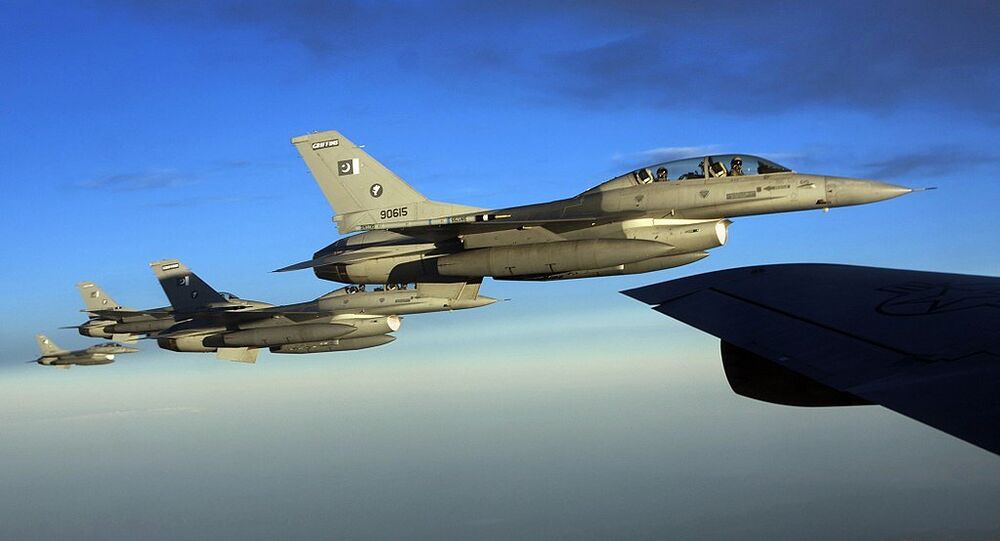 New Delhi (Sputnik): Days after the US State Department approved the sale of F-16 fighter jet technical support to Pakistan, India expressed "grave concern" to the Trump administration over the deal.

The Indian government has raised the issue with the US at different levels since the approval came on 26 July.

"We have taken up the matter with US ambassador in New Delhi and as well as with the government of United States in Washington through our ambassador. We have expressed grave concern over the US military assistance to Pakistan", Indian Ministry of External Affairs spokesperson Raveesh Kumar said during a weekly briefing.

Nevertheless, the US authorities informed India that the proposed sale does not indicate any change in the US policy of maintaining the freeze in military assistance to Pakistan, the spokesperson added.

The statement holds importance against the backdrop of a suspension of a total of $1.66 billion in security assistance by Washington to Pakistan in November 2018, after President Donald Trump criticised Islamabad’s alleged lack of effort in fighting terrorism.

The US Defence Security Cooperation Agency, earlier through a statement, added that the proposed sale will support the foreign policy and national security of the United States by protecting US technology through the continued presence of US personnel that provide 24x7 end-use monitoring.

The Pentagon's plan to monitor the jets came after Indian accusations that Pakistan misused its F-16s during a February dogfight. India claimed that Pakistan used one of its F-16s in the incident in February 2019, when at least one Indian Air Force (IAF) jet was downed. This was considered a violation of the F-16 sale agreement between Pakistan and the US, as the fleet was provided to Pakistan for the purpose of combating terrorism.

Islamabad has denied the accusations and said that it had used other fighter aircraft in the aerial skirmish. A US probe conducted at the request of India has also failed to prove the use of F-16s.

The dogfight took place after the IAF conducted airstrikes on Pakistan's territory against alleged positions of a terrorist group that had earlier attacked an Indian security convoy.