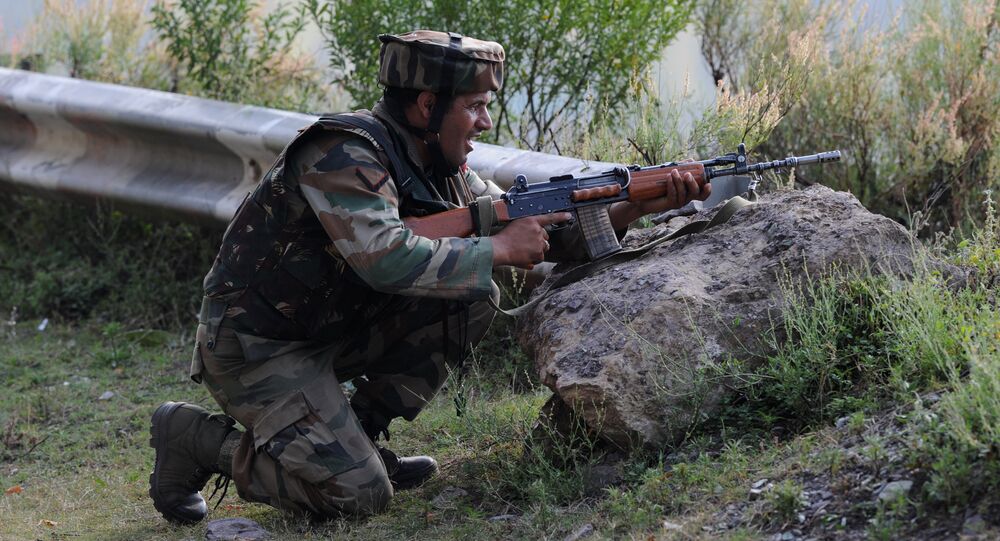 New Delhi (Sputnik): The armies of India and Pakistan exchanged artillery fire at the border on Tuesday, in which at least three soldiers lost their lives – one from Indian and two from Pakistan.

The firing started at 2.30 pm local time, according to local media report citing an Indian official.

Sputnik sources said that firing started in the Tangdar, Keran and Sunderbani sectors along the Line of Control in the troubled region of Kashmir and that it remains ongoing at the time of this report.

​Earlier in the day, local media reported that police asked locals to move towards safer areas. All shops, businesses and schools were immediately closed as people rushed home.

Earlier on Monday, the Pakistan foreign ministry summoned the Indian Deputy High Commissioner Gaurav Ahluwalia for the second time in a week and protested against unprovoked ceasefire violations by the Indian armed forces along the Line of Control.

Pakistan claimed that the Indian firing claimed one life and injured three others. India claimed that a 10-day-old infant was killed in by Pakistan's artillery.

Tensions between the two nations took a turn for the worse after the Pakistani military downed two Indian warplanes in the disputed Kashmir region in February, reportedly reacting to an earlier airstrike by Indian aircraft against what New Delhi claimed was a Jaish-e-Mohammad camp. India has blamed Pakistan for supporting terrorists and having a "direct hand" in a deadly attack on the Indian paramilitary police force in the state of Jammu and Kashmir. Pakistan rejects the claims.