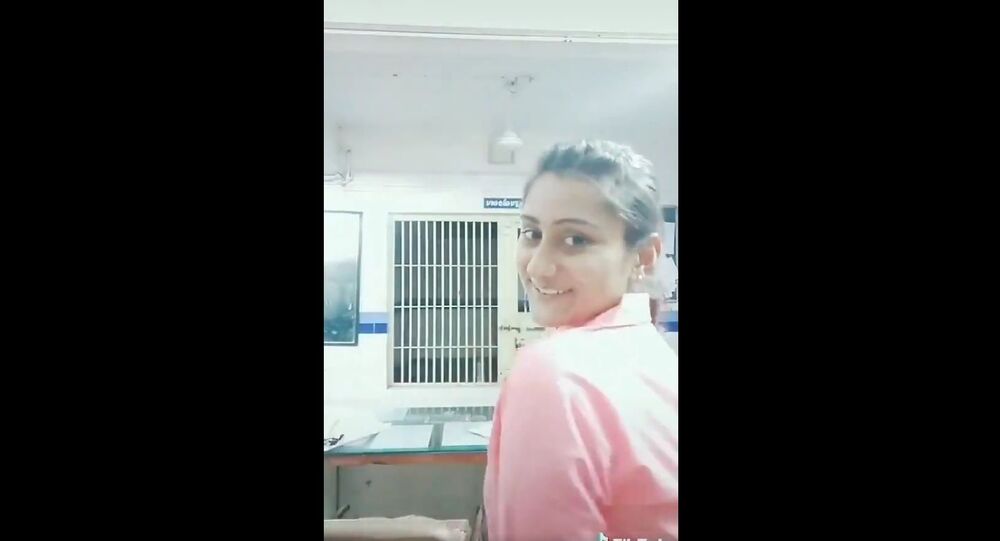 New Delhi (Sputnik): A female police constable in India had to pay quite dearly for her newly found fame after her video went viral on Tik-Tok videos.

As her latest video clip, showcasing her singing and acting out Bollywood film clips while on duty started to go viral on social media, she was handed a letter of suspension by her police department for violating rules and regulations on the job, media reports said on Thursday.

The woman, who posted as an officer of the Lok Raksha Dal (LRD) unit of Gujarat Police in Langhanaj station, Mehsana district had previously entertained netizens with her singing and dancing videos which spread on social media.

Gujarat: Woman Constable suspended after she shot a Tiktok video inside a police station in Mehsana. Senior officer calls her a serial offender and initiates inquiry against her. @IndianExpress pic.twitter.com/UnWI4IZsWv

The police authorities were quick to take cognisance of the matter and suspended her with immediate effect.

"As we can see in the video, the woman constable wasn't wearing her proper uniform inside the police station, which is a violation of the law. Secondly she can be seen using her personal cell phone while being on duty, which she isn't supposed to," a senior official was quoted as saying by daily Indian Express’s web portal.

"She has been suspended, and an inquiry has been initiated against her," the official added.

The official further explained that Chaudhary is a repeat offender and had been warned about her Tik-Tok videos on earlier occasions.​

​Meanwhile, as the news of her suspension spread, a section of Twitterati sympathised with the constable, urging the authorities to go easy on her.

The passion if promoted can bring in positive approach and motivation in work ..
Service rules doesn't permit it seems

What's wrong in this video? No point in suspending her.. It was just a small video. Not sure why liberty is going on a toss in India.

Please just put some warning and let her serve our nation. JAI HIND

TikTok is an iOS and Android media app, that allows users to create and share short videos, and is widely popular in India and with its videos often going viral on social media.

Some TikTok users have shot to fame and even managed to bag contracts with labels, such as T-Series.

Some months back, Indian nurses in the state of Odisha sparked a debate when they uploaded TikTok videos of them dancing in the infant intensive care unit of a district hospital.