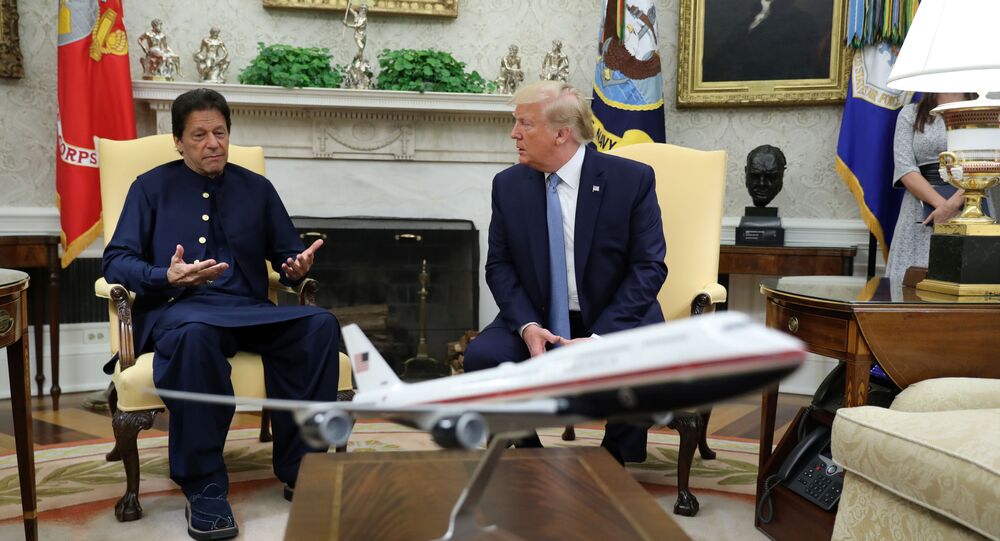 Sputnik (New Delhi): While US President Donald Trump’s remark on Kashmir has caused a diplomatic storm, a US Democratic Congressman has come out to tender an apology to India’s envoy to the US.

Democrat Brad Sherman tweeted, that he apologised to Indian Ambassador to the US, Harsh Shringla, for the “embarrassing” and “amateurish” comments made by US President Donald Trump during his meeting with Pakistani Prime Minister Imran Khan. Sherman added that he believed Indian Prime Minister Narendra Modi would “never suggest such a thing”.

Everyone who knows anything about foreign policy in South Asia knows that #India consistently opposes third-party mediation re #Kashmir. Everyone knows PM Modi would never suggest such a thing. Trump’s statement is amateurish and delusional. And embarrassing. 1/2

Trump, who hosted visiting Pakistan Prime Minister Imran Khan at the White House on Monday 22 July, said at the joint press conference "I was with Prime Minister Modi two weeks ago, and we talked about this subject, and he actually said 'Would you like to be a mediator or arbitrator', I said "where," he said "Kashmir".

India was quick to dismiss President Trump's statement and categorically denied having made any such request to Prime Minister Modi during his meeting with the US leader in Osaka, Japan during the G-20 Summit.

President Trump's comments caused an uproar in India, with politicians and social media users rubbishing it, and rejecting any third-party mediation on the Kashmir issue.

In addition to this, Sherman's tweet went viral with 4.7k retweets and over 8.8k likes, Indian netizens thanked the Democratic Congressman for supporting their cause on the Kashmir Issue.

Thank God atleast somebody is sensible in the US senate,after the immature nd outlandish remarks from @POTUS we were wondering if the President was even briefed abt India’s stated position on Kashmir since decades abt It being resolved bilaterally only.

Great words Sir. It takes a real statesman to speak such truthful words

Well sir thanks for immediate clarity because we trust our PM modi he is capable enough to handle any issues related to our country's future we are in safe hands as always.@narendramodi @PMOIndia @AmitShah

@ImranKhanPTI Historically Pakistan was Created from India, hence every inch/CM of land belongs to India including J&K & POK, no one has the Right to become a mediator, what Pakistan has - are the People in those lands living in Peace Harmony? Yes they can take away Gandhi's.

Sir, we completely understand your point, @realDonaldTrump has tendency to do BLOOPERS .

Indian lawmaker and former UN diplomat Shashi Tharoor said Trump doesn’t have the “slightest idea of what he’s talking about.”

I honestly don't think Trump has the slightest idea of what he's talking about. He has either not been briefed or not understood what Modi was saying or what India's position is on 3rd-party mediation. That said, MEA should clarify that Delhi has never sought his intercession. https://t.co/DxRpNu6vw2

The dispute in the Kashmir region dates back to 1947, when shortly after India and Pakistan gained independence from British colonial rule, Pakistani forces along with local militia attacked the Kashmir valley region ruled by Maharaja Hari Singh, who, after initially resisting the idea, acceded to India, much to Islamabad's dismay.