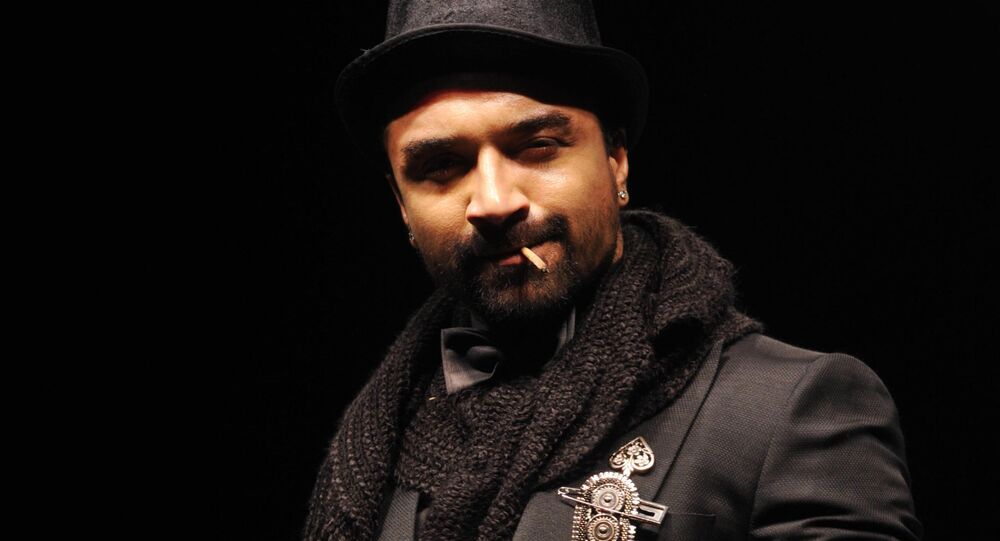 New Delhi (Sputnik): The arrest of controversial Indian actor Ajaz Khan, often in the news for his amusing antics, on Thursday by Mumbai Cyber Police for posting “objectionable” videos on the Tik-Tok app has kicked off a furore on social media.

It has been learned that Ajaz was arrested by police following a written complaint by a local political activist about two “communally sensitive” videos posted by him.

Mumbai Police: Actor Ajaz Khan has been arrested, a case was registered against him for creating/uploading videos with objectionable content promoting enmity between different groups on grounds of religion, & creating hatred among public at large. pic.twitter.com/Xm4ND6XXmJ

A spokesperson for the Mumbai Police Department has confirmed that the videos posted by Ajaz were aimed at provoking animosity between the people of two religions. "It was found that Ajaz Khan has created/uploaded these videos with objectionable content mainly promoting enmity between different groups on grounds of religion, etc. and create (sic) hatred among public at large", the police official was quoted as saying by portal News 18.

As the news of the actor’s arrest spread, a section of Twitterati hailed the arrest of the actor who came into the national limelight after participating in the seventh season of Indian reality show “Bigg Boss”.

#AjazKhanArrested To all the idiots who are supporting #AjazKhan
He has a long criminal record pic.twitter.com/AkTNptyeGN

#AjazKhan
Arrest this person a kalank on muslim community we dont want such muslim who spread hate just to attract public and to sell cheap publicity. For law everybody is law Article 15 pic.twitter.com/xgkyCcOlD4

People knows #AjazKhan for Hate Speech against Hindus, not for his acting. He want to be famous like Owaisi brothers, who didn't do anything for Muslims but show themselves they are "Islam ke Thekedar".

#AjazKhan
we thanks mumbai police administration (@MumbaiPolice ). At that time, by arresting antisocial elements such as #AjazKhan, symbolizes peace. pic.twitter.com/T4FpCCqSPw

However, not all seemed happy with the actor’s arrest. Some netizens were of the opinion that even if people do not subscribe to what the actor says in the videos, he should still have the freedom to express himself.

#AjazKhan has been arrested for sharing Tiktok video of communal nature. Has Sunita Singh Gaur, cadre of Bjp party arrested for asking Hindu men to rape Muslim women? She is expelled from the party. But why no arrest?https://t.co/d8rr7SrEGP

UNACCEPTABLE assault on FoS. @MumbaiPolice arrests @AjazkhanActor for his video that mocked them.

Have come to learn of this man's deeds and history since. He is an out-and-out bigot. But I stand for his freedom to be a bigot.

This actor, who often remains in the headlines for his controversial social media remarks, is not facing the law for the first time. In October 2018, Mumbai Police’s anti-Narcotics cell arrested Ajaz from a hotel for allegedly possessing banned narcotic substances.