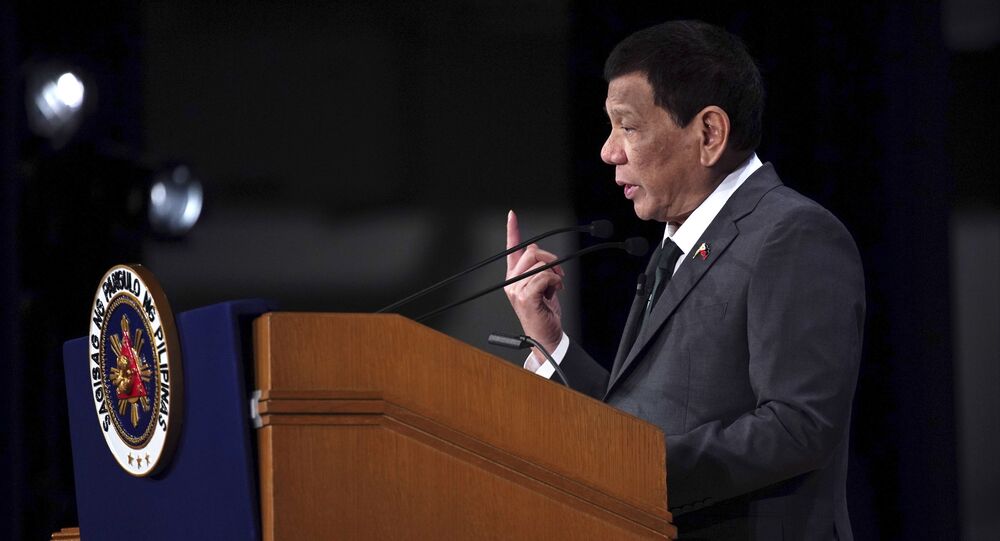 The Filipino president has repeatedly dismissed accusations of human rights violations, allegedly committed under the banner of his campaign to combat drug lords in his country.

Philippines President Rodrigo Duterte has slammed the resolution adopted by the UN Human Rights Council, calling for an investigation into alleged human rights violations in his country, by saying that he will not stand in a court led by a white person, the Inquirer reported.

"I will not answer a Caucasian, you must be stupid. Who are you? I am a Filipino. We have our courts here. [Why] you have to bring me somewhere else? I would not like that. I have my country", he said.

Duterte further stated that at the same time, he is ready to face trial and even punishment, but only in his homeland. He also argued that the courts in the Philippines are working just fine, and thus do not require any interference by the international community into their activities.

"I will only face, be tried, or face a trial in a Philippine court, presided [over] by a Filipino judge, [and] prosecuted by a Filipino. And maybe they can reimpose the death penalty, [so I can] die on Filipino land", Duterte said.

The president also shared that he is considering cutting ties with Iceland, which initially introduced the resolution to the Human Rights Council. Earlier, Duterte slammed the country for failing to comprehend the problems of the Philippines, noting that the only problem that Iceland had ever faced was "ice".

"What is the problem with Iceland? Ice only. That is your problem. You have too much ice, and there is no clear day and night there. So you can understand why there is no crime, no policeman either, and they just go about eating ice", he said.

Duterte has been facing accusations for some time now, over alleged human rights violations, which purportedly took place during his ongoing war against drugs in the country. His government is suspected of turning a blind eye to extrajudicial killings of suspects, unlawful arrests and even kidnappings allegedly at the hands of police forces. Duterte has repeatedly denied these accusations.

Philippine President Duterte Warns 'Sons of B**ches' Against Impeaching Him