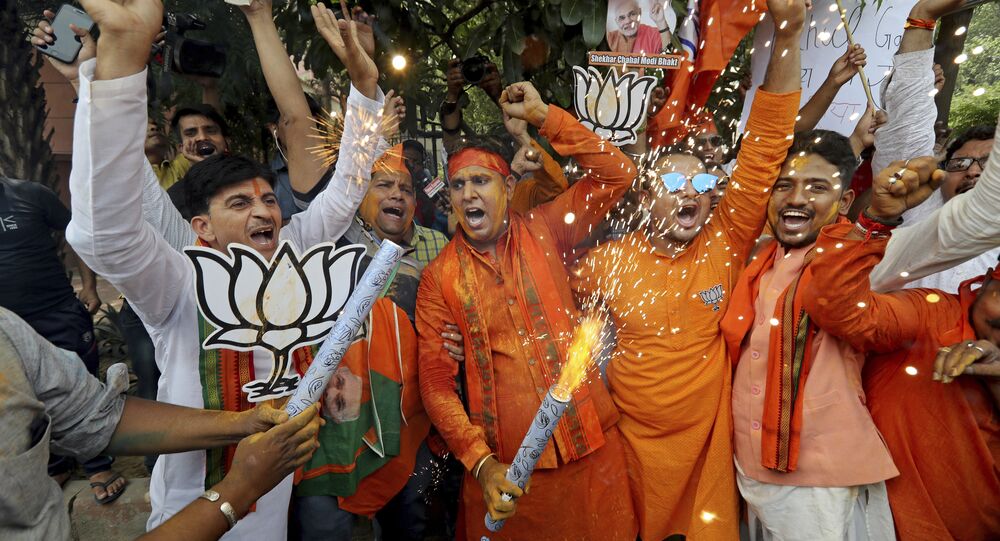 Indian Politician Expelled From Party Over Lewd Conduct in Video

New Delhi (Sputnik): A state legislator in the Indian state of Uttar Pradesh has been expelled from his party after a video clip, showing him dancing while drinking and waiving revolvers as well as using the choicest of expletives, was posted on social media.

Kunwar Pranav Singh has been expelled from the Bharatiya Janata Party for six years for his misdemeanour after a video of him dancing lewdly and brandishing guns went viral on 10 July.

The lawmaker, who goes by his self-proclaimed name of “Champion”, was serving a show cause notice issued by Uttrakhand BJP chief Ajay Bhatt, in which his explanation was sought over the incident. Failing to give a satisfactory answer, the politician has been expelled from the party, Anil Baluni, the BJP media-in-charge, told the media.

Anil Baluni,BJP: Party sought an explanation from Kunwar Pranav Singh Champion (Uttarakhand MLA) on the video where he is seen abusing&indulging in wrongful acts. Since his reply was not satisfactory as per our disciplinary committee,he has been expelled from the party for 6 yrs. pic.twitter.com/OQW4k11a8y

The decision has been hailed by social media users, who earlier slammed the politician for his indecent act, asking how a public representative could behave in such a derogatory manner.

Good job these hooligans deserve this bcz they r not representing the people instead threatening people and exploiting the responsibility which is denting our holy constitution of which ppl like him take swear. In fact all his remuneration and allowances shud be cancelled..

Expel him and all tainted persons from the party.

Right decision, he was behaving like a chimpanzee with guns in both hands and mouth, he can be a major attraction in any zoo

In a video that went viral on 10 July in Indian media, Pranav Singh was caught dancing to the tunes of a Bollywood song while flaunting three pistols and a rifle in his hands. Singh could also be heard hurling abuses and drinking liquor. The politician was reportedly celebrating his homecoming after a leg operation, along with his supporters.

BJP MLA Pranav Champion who was recently suspended from the party for threatening a journalist, seen in a viral video brandishing guns. Police says, "will look into the matter and also verify if the weapons are licensed or not." (Note: Abusive language) pic.twitter.com/AbsApoYR2g

Shortly after the video went viral, BJP media-in-charge Anil Baluni said that the behaviour of the BJP lawmaker is condemnable and that the party will take serious action against him.

Anil Baluni,BJP: Party sought an explanation from Kunwar Pranav Singh Champion (Uttarakhand MLA) on the video where he is seen abusing&indulging in wrongful acts. Since his reply was not satisfactory as per our disciplinary committee,he has been expelled from the party for 6 yrs. pic.twitter.com/OQW4k11a8y