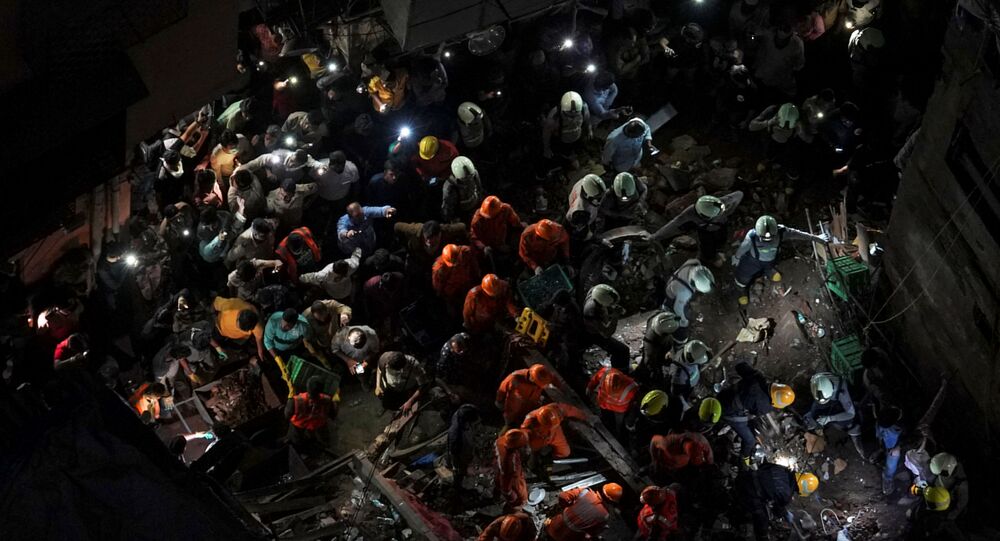 New Delhi (Sputnik): As a four-storey building crumbled like a pack of cards in India’s cosmopolitan city of Mumbai on Tuesday, a video clip of local residents joining hands to form a human chain to clear pieces of debris and rescue helpless people, including a three-year-old child trapped underneath, has left many overwhelmed.

The nearly 100-year-old building situated in the city’s Dongri slum area, collapsed around 11.00 a.m. on Tuesday.

​So far, 14 people were said to have been killed in the accident, while around 100 are still feared trapped, as rescue operations continue on Wednesday. At least nine people, including two children, were reportedly rescued from the building.

Videos showing the locals going out of their way, to come to the dangerous site and help rescue people stuck under the rubble, offered a heartwarming element to this moment of plight. Locals have also helped clear the way to allow excavators and other machinery to enter into the narrow lanes, to facilitate the efforts of rescue teams.

#Mumbai: the crumbling city? This is not about why the 100 year old building collapsed; but also who lived, on which floor of it & why. It is also about the human chain of local resident that formed to help move victims & material through the narrow lanes pic.twitter.com/6oyBYDkt4N

​Prime Minister Narendra Modi took to Twitter to express his condolences after the tragedy.

Collapse of a building in Mumbai’s Dongri is anguishing. My condolences to the families of those who lost their lives. I hope the injured recover soon. Maharashtra Government, NDRF and local authorities are working on rescue operations & assisting those in need: PM @narendramodi

Many netizens, however, tried to underline the efforts of locals and showered them with ample praise.

#DongriCollapse: The white light to the top left was provided by 3 young businessmen from Pune. The generator & light were turned after authorities shut off electricity in the area. Locals used the torchlights on their phones to light up the area while the generator was set up. pic.twitter.com/KU4UHl8ji2

Human chain to remove debris in search for survivors in Mumbai's Dongri#Dongri pic.twitter.com/qLOfT5tIpO

@ipsvipul_ Let me give you an example yesterday in Mumbai a four storied building collapsed, it was very unfortunate but could have been avoided if all ppl concerned were doing there jobs...the rescue teams reached the spot after an hour or two...locals were trying to help...in

Pray, God's collapsed"Mumbai Dogri Kesarbai building, people trapped "safely out"👏
On the rescue, thank you to the locals and the police.🙏👍
"The Haunted BMC of Corruption", "Thu" on the country's "local bodies" 😡 👎@AmitShah @PMOIndia
🇮🇳🚩 Every Mahadev 🙏

​Maharashtra Chief Minister Devendra Fadnavis has said the building, which was about 100 years old, was not in the state government’s list of dilapidated structures.  Recently the building was handed over to a developer for redevelopment.