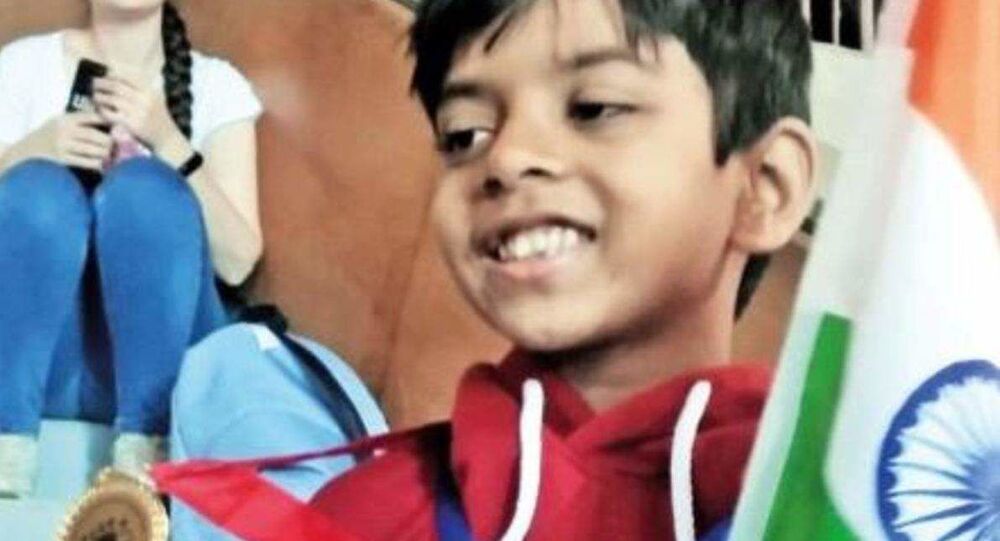 New Delhi (Sputnik): An eight-year-old cancer survivor made a bold statement about his resolve to live and never give up, by winning a gold medal during the World Children’s Winners Games 2019 held in Moscow.

Aronyatesh Ganguly, from the Indian state of West Bengal, impressed netizens with his top podium finish at the games held earlier this month between 4 to 7 July.

An incredible achievement by Aronyatesh Ganguly, winning table tennis gold in Russia! Your story and victories are an inspiration to all of us; I am sure this is the first of many such achievements that will come your way. You’ve made your country proud! https://t.co/S4p8NjkbQb

We will learn from you how to fight it back dear ❤️❤️ https://t.co/OTPCBEo99u

Eight-year-old cancer survivor Aronyatesh Ganguly from West Bengal bags gold in a Table Tennis competition in Moscow. Aronyatesh is really an inspiration for all of us - https://t.co/5VUZ24FaAK

Heartiest Congratulations and blessings for little champ, Aronyatesh Ganguly for winning #gold in table tennis at World Children's Winners Games in #Moscow.
Being a #Cancer survivor, he shows he is a real fighter. Wish him loads of success & good health.

​His feat was even appreciated by Chief Minister of the India state of Rajasthan Ashok Gehlot.

Heartiest Congratulations and blessings for little champ, Aronyatesh Ganguly for winning #gold in table tennis at World Children's Winners Games in #Moscow.
Being a #Cancer survivor, he shows he is a real fighter. Wish him loads of success & good health.https://t.co/pKelMZLbyI

Ganguly was the youngest participant from India and the only entrant from Bengal’ s Serampore district, among 10 other participants from India. The little star participated in all six events — track, chess, football, table tennis, swimming, and rifle shooting, but won the shiny medal in table tennis in the event held in Moscow, Russia from 4-7 July this year. The games, better known as The Winners Games, are an international sports competition for childhood survivors of cancer.

The annual games, organised by the Padari Zhizn (Gift of Life) Foundation, were established by the Russian actors Chulpan Khamatova and Dina Korzun, to offer an opportunity to children from all over the world to participate in the competition, and to help childhood cancer survivors rehabilitate and regain their self-worth.

At the age of five, Ganguly was diagnosed with leukaemia. The little boy battled the fatal disease for two years and was declared cancer-free in December 2018.