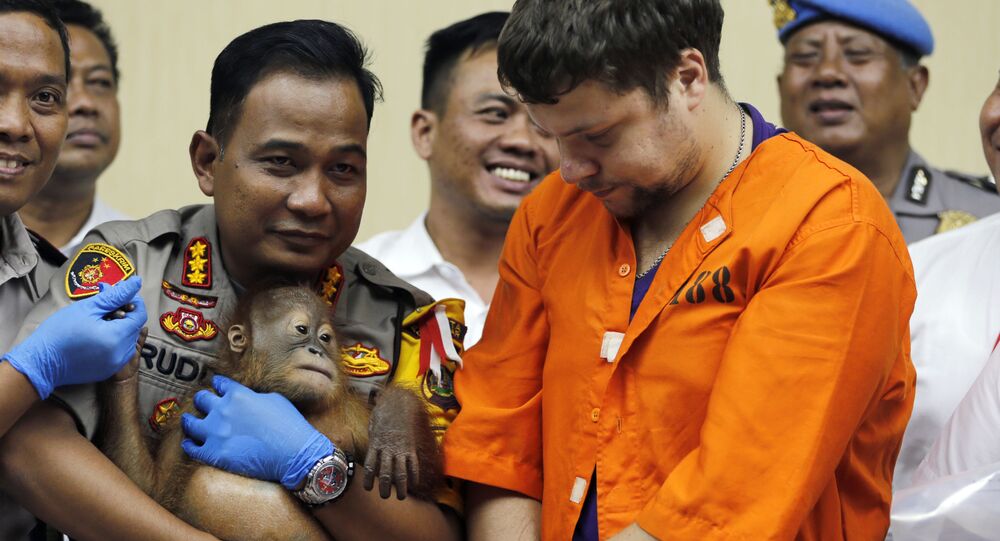 A 28-year-old Russian national was sentenced to one year in a Bali prison and ordered to pay a fine for attempting to take a two-year-old, drugged orangutan back home as a pet.

On Thursday, Russian tourist Andrei Zhestkov was found guilty and sentenced to twelve months in prison and ordered to pay a 10 million rupiah fine (44,518 RUB, $700) or serve an additional two months behind bars.

Ketut Catur Marbawa, head of Bali Province conservation group Balai KSDA Bali, announced Zhestkov was detained and arrested at the Ngurah Rai International Airport on March 22 after customs officers discovered allergy pills, two live geckos and five lizards in his luggage, along with a two-year-old male orangutan, baby formula and blankets in a rattan basket. None of the animals were harmed by Zhestkov.

Zhestkov told officials that he had given the orangutan a mixture of baby formula and allergy pills to force the animal to sleep for approximately three hours. He also revealed that he planned on redosing the two-year-old primate during the layover in Seoul during his trip home.

According to AFP, Zhestkov had intended on taking the ape home as a pet after receiving it from another Russian tourist who allegedly purchased the orangutan in a Java street market for 188,560 RUB ($3,000 USD). The man who illegally purchased the primate allegedly told Zhestkov that he could keep it as a pet.

The orangutan is both a protected and critically endangered species, according to the International Union for Conservation of Nature, with approximately 100,000 remaining around the world.

Sputnik reported in April that data published by Global Forest Watch documented that humans had destroyed some “30 million acres of tropical rainforest” in 2018, the fourth-highest loss since global satellites began collecting data in 2001.

In addition to forest fires, the harvesting of palm oil play a massive role in the loss of ecosystems that sustain the regular habitats of not only orangutans, but also gorillas, jaguars and tigers.