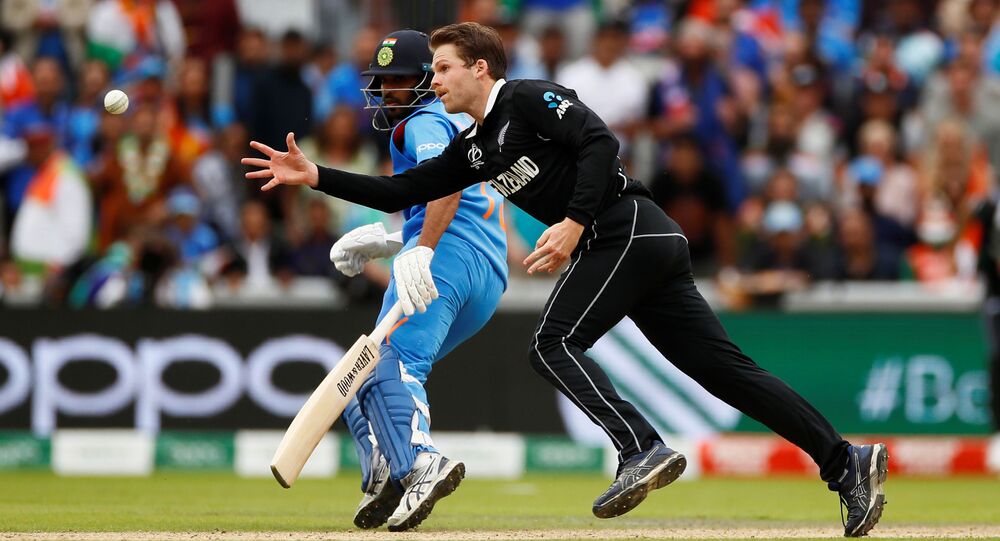 New Delhi (Sputnik): Acknowledging the fighting spirit displayed until the last overs despite suffering early setbacks in terms of losing its top batsmen, the Indian cricket team has received a pat on the back for the die-hard spirit shown in the cricket world cup semi-final match against New Zealand.

Leading the nation, Prime Minister Narendra Modi, celebrities, and netizens heaped praise on the die-hard spirit of Team India, who crashed out of the 2019 Cricket World Cup in England with an 18-run defeat by New Zealand in the rain-affected semi-final.

Prime Minister Modi extended his best wishes, applauding the team’s “fighting spirit till the very end”. Member of Parliament of the opposition Congress party Rahul Gandhi and other politicians have also wished the team well in future matches.

A disappointing result, but good to see #TeamIndia’s fighting spirit till the very end.
India batted, bowled, fielded well throughout the tournament, of which we are very proud.
Wins and losses are a part of life. Best wishes to the team for their future endeavours. #INDvsNZ

Though they’re a billion broken hearts tonight, Team India, you put up a great fight and are deserving of our love & respect.
Congratulations to New Zealand on their well earned win, that gives them a place in the World Cup final. #INDvNZ #CWC19

Not what we expected or hoped for. But #TeamIndia had an honorable & spectacular run at #WorldCup2019
We are proud of you, boys. The fighting, never say die spirit meant you were in the hunt till almost the very end of the match today
There will be matches & cups to win aplenty🙏

Bollywood celebrities showered both praise and love on Indian cricket captain Virat Kohli and his teammates in their “moment of grief”.

B-Town hunks Aamir Khan and Shahid Kapoor and divas like Nimrat Kaur were immensely proud of the team’s effort.

When you top the table you prove you are the best in the world. And a bad day is just a bad day. Team India was the best in this world cup. No doubt. Proud of them. #TeamIndia #bleedblueforever

Thank you #IndianCricketTeam for your game & your efforts. You played very well. You bind us together. You bring out the Indian in us. In fact You bring out the tricolour in us. You will always be our Heroes. We love you. 🙏😍🇮🇳 pic.twitter.com/ArwdoroPmF

It was just not our day... the dream may be over, but the journey was beautiful. Thank You for the amazing memories #TeamIndia & capt. @imVkohli 🇮🇳 #CWC19 #WorldCup2019 https://t.co/TS4xG7YOUN

Thank you for all your grace and the glorious journey so far, you lead by example @imVkohli , in good times and bad. Respect and love always...💙🇮🇳 #TeamIndia #MenInBlue https://t.co/Ciz8FEWjIb

Humbled by the heartfelt wishes, Skipper Kohli thanked supporters for making the tournament a “memorable” one.

Firstly I want to thank all our fans who came in huge numbers to support the team. You made it a memorable tournament for all of us & we definitely felt the love showered upon the team. We are all disappointed & share the same emotions as you. We gave everything we had.Jai hind🇮🇳 pic.twitter.com/rFwxiUdqK5

India's team performed in stellar fashion during the group stages of the tournament and topped the points table going into the semi-final, fell to fourth ranked New Zealand in the knock out encounter at the Old Trafford cricket ground in Manchester on Wednesday.

Though, millions of Indians were left heartbroken seeing their dream of the World Cup being lifted by the Indian cricketers being shattered, the latter were applauded for not giving up.

Australia, meanwhile, will take on arch-rivals England in the second semi-final of the World Cup at the Edgbaston ground in Birmingham on Thursday. Today’s winner will clash with New Zealand in the International Cricket Council (ICC) World Cup Final to be played at the Lord’s Cricket Ground on 14 July (Sunday)