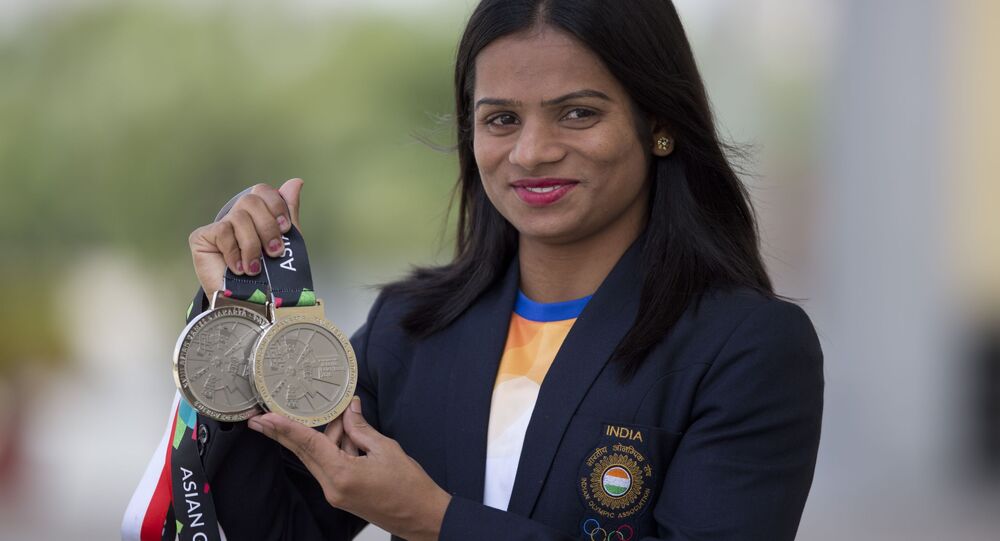 Running at No. 4, Dutee was the first of eight athletes to blast off the starting blocks at the World University Games.

India’s fastest sprinter clocked 11.32 seconds to win the race. This is India’s first gold medal in a 100 metres race at this edition of the athletic meet.  With her latest feat, she has become the second Indian sprinter to win gold in a global event after Hima Das, who won the 400 Metres in the World Junior Athletics Championship last year.

​The 23-year-old Dutee, who recently opened up about her same sex-relationship, posted a picture of her medals on social media @DuteeChand saying, “Pull me down, I will come back stronger.”

Pull me down, I will come back stronger! pic.twitter.com/PHO86ZrExl

The President in a message said it’s “a moment of immense pride for our country”.

Congratulations @DuteeChand for winning the 100m sprint at the Universiade, the World University Games, in Naples. This is India’s first such gold and a moment of immense pride for our country. Please keep up the effort, and look to greater glory at the Olympics #PresidentKovind

​Prime Minister Narendra Modi also congratulated her calling her “well-deserving and an exceptional athlete of India”.

I've been passionately following since my childhood but it never came. Finally, for the first time, a gold for India! Congratulations @DuteeChand for winning the 100m sprint at the Universiade, the World University Games, in Naples🇮🇳 pic.twitter.com/Rh4phsKCEI

​Business tycoon Anand Mahindra and others joined the leaders to congratulate Dutee on her great success.

a girl from a poverty-stricken family, a girl who fight against hyperandrogenism rule and society's dogmatic rules about sexuality and love---once again made India proud...🥇🏆🏃‍♀️👍✌️@DuteeChand #DuteeChand #Naples pic.twitter.com/cw162vwtWr

Way to go @DuteeChand ! The 100m sprint is the most exciting event in athletics. It’s a display of sheer physical ability and power. What a delight to see an Indian athlete power her way to the front, leaving all others behind.... https://t.co/7f0KQg48s6

Congratulations to the incredible @DuteeChand who has become the first Indian woman track & field athlete to win a gold medal in the World Universiade. pic.twitter.com/CUYWJJScGK

Watch the video! It's great to see an Indian athlete powering her way to a 100m gold! Well done, @DuteeChand https://t.co/OwZ89cQRzP

Dutee was recently featured on a coveted Indian magazine cover. She is on the latest magazine cover of Cosmopolitan India and the magazine has refers to her as “India’s shining star" and "India's first openly gay athlete.”

Dutee is one of the first, of a few athletes in the world, to openly admit a same-sex relationship. She said that her family is not fully supportive of her lifestyle, but she hopes to find acceptance soon. "What I am doing is not wrong, nor is it a crime," she said in her interview for the magazine.