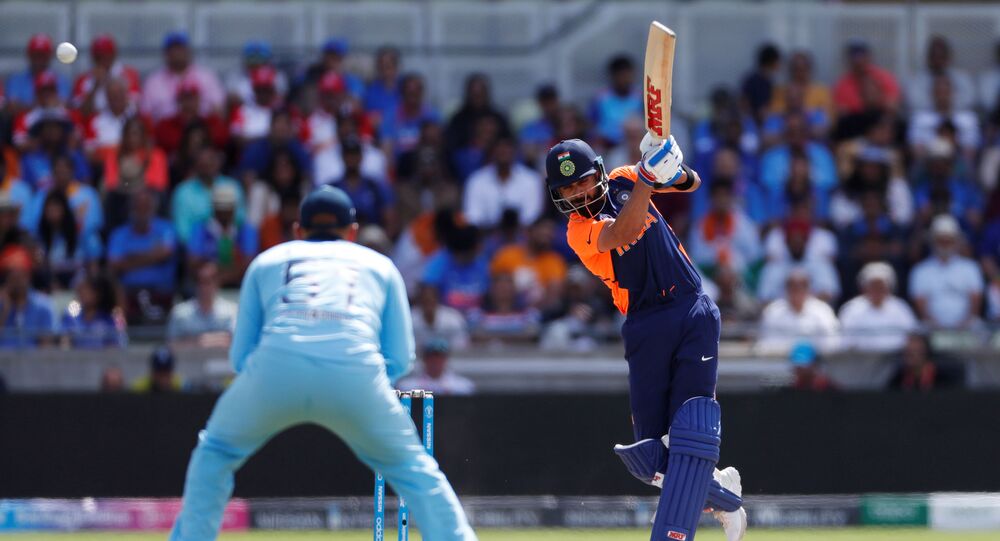 New Delhi (Sputnik): The England & Wales Cricket Board (ECB) was bashed by some netizens for “gross mismanagement” of the cricket grounds, and failure to put real measures in place, to avoid the effect of rains during the Cricket World Cup 2019 semi-finals between India and New Zealand.

England is hosting the ICC Cricket World Cup for the 4th time since the tournament’s inception in 1975.

With the rain unrelenting, play has been called off for the day. New Zealand will resume their innings tomorrow at 10.30am on 211/5 with 3.5 overs to bat.

Throughout the tournament, recurring “English rains” have led to the complete abandonment of 4 matches, with 3 of them in just one week.

Several other matches were shortened or delayed as the ground staff at the English grounds were ill-equipped to clear water from the playing field in time.

Irked by constant disruptions in the much-anticipated World Cup 2019, netizens and some cricket experts have slammed the ECB for the record number of abandoned and or no result games due to rain, in a single edition of the tournament.

A cricket World Cup semi-final was played today in England but hardly anyone cares. The English Cricket Board - in all its greed and myopia - has failed to create a national moment. It had years to prepare for the tournament and has blown it.

@ICC again asking... England cricket board have not enough money to cover the ground? They cannot maintain there ground.... what u expect from ground staff that they will remove water by buckets from the ground.....

Third class management's by England Cricket board, they won't have capabilities to manage #CWC2019 #CWC19

One user called for an outright ban on the English board, as a penalty for handling Cricket's most coveted tournament in such a mediocre way.

@_rrroy_
More than 10 rain affected game (4 washouts) in a tournament like #CWC19 is too much.
Even in semifinal England board didn't show any intent to cover the whole ground.
How irresponsible?
Should be banned from organising international cricket min for a year#CBHaveYourSay

Another user questioned why the ECB has failed to upgrade their grounds or construct “closed roof stadiums” similar to the ones recently unfolded by Cricket Australia.

Country Like England where the rain plays big inning..... Why England Cricket board is not thinking on Close roof stadiums? Little surprising fact#AskTheExpert

Earlier, Indian cricket legend Sunil Gavaskar urged the International Cricket Council (ICC) not to pay the “host fee” to the ECB for the matches that were abandoned due to rain, suggesting that their mismanagement should be punished.

“I also believe the ICC needs to tell the ECB now ‘the game hasn’t taken place because of negligence from your part. So you will not get that guaranteed USD 750,000. ECB gets USD 750,000 irrespective of whether a ball is bowled or not,” Gavaskar was quoted as saying by the portal The Hindu Businessline.

“That should not be the case. If the game doesn’t start tomorrow because of this, I don’t think the ICC should be giving the ECB money.”