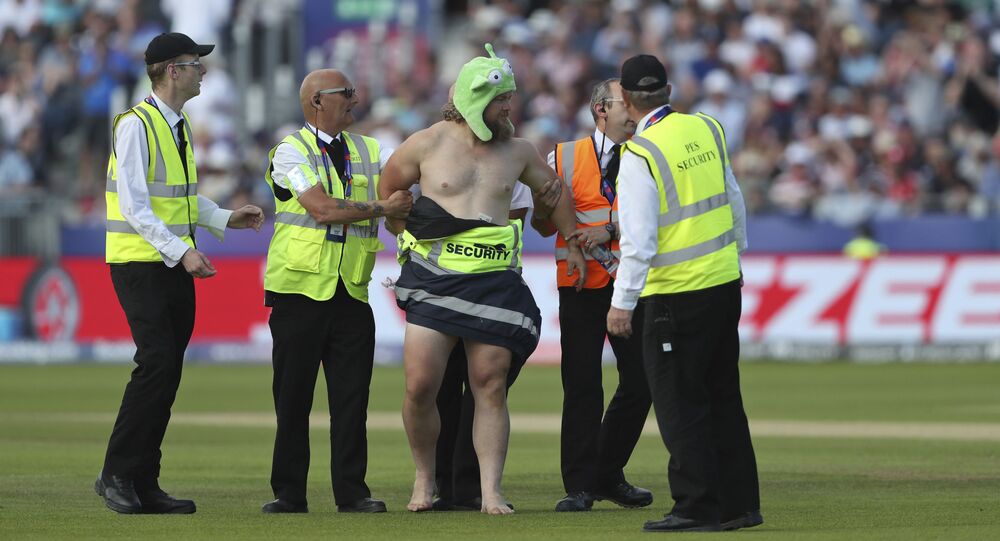 New Delhi (Sputnik): A streaker interrupting a World Cup 2019 match between England and New Zealand at the Riverside Ground in Chester-le-Street, in the English county of Kent, has left netizens smiling and immensely amused.

The video shows the streaker, wearing just a green hat, jogging to the centre of the ground on Wednesday (3 June), where he performs a somersault and dance before New Zealand batsmen Tom Latham and Mitchell Santner.

Caught unaware, security staff took some time to bring him to the ground.

Spectators cheered as the streaker briefly broke free from the clutches of the security staff and ran back towards the wicket. He was eventually led away.

When the match was interrupted, New Zealand’s score was 145 for the loss of six wickets, chasing down an England total of 306 for a win. The former, however, lost the game by 119 runs, scoring only 186.

Through that win, England qualified for the World Cup semifinals for the first time in 27 years. Despite the defeat, New Zealand is also on course to enter the last four stage of the International Cricket Council (ICC) tournament.