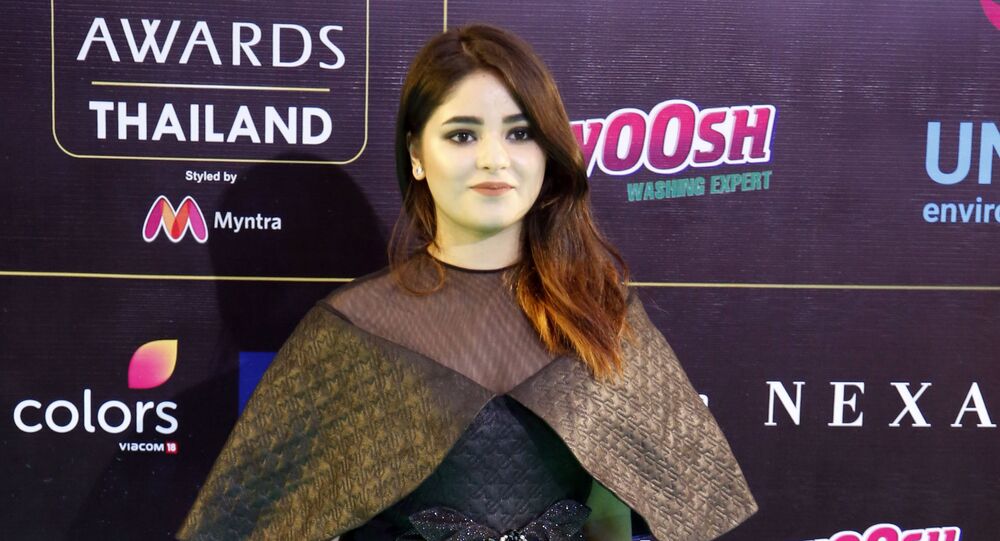 The teenage actress who has delivered blockbusters like ‘Dangal’ and ‘Secret Superstar’ has decided to quit Bollywood, saying it is ‘interfering with her religion’. The national award winner stated that despite her fame and success, she was unhappy with the line of work.

New Delhi (Sputnik): The announcement by Indian film actress Zaira Wasim that she had decided to quit the movies for religious reasons, has created a row on social media.

On Sunday Zaira took to Instagram to share a six-page letter, where she said “Bollywood took me away from Islam” and cited interference in her religious practices as the reason for her decision.

The ‘Dangal’ star who hails from a Kashmiri family, further stated that when she tried to adjust to her new lifestyle, she realised that her career had negatively affected her relationship to religion.

Zaira, the national award-winner, however, wasn’t appreciated for her decision by many, with a section of women's rights activists calling it “regressive”.

People are saying actress Zaira Wasim's CHOICE to quit acting for religion shld be respected.Really?Women are brainwashed by misogynistic patriarchal society to be submissive,dependent,illiterate,slaves,sex objects,childbearing machines.Women hv no freedom or option to choose-

Why couldn’t Zaira Wasim quit Bollywood quietly? Why did she have to paint acting as a path of ignorance, sin & anti-religion? In her personal choice/decision & public self-righteousness, she stigmatized all actors. No different from Islamist extremists who call art ‘haraam’.

It's someone's right to choose what profession one finds happiness in. Wish the decision did not have to be accompanied with a sermon on "good way of life" #ZairaWasim .The opposite is a huge struggle for many who are prevented to make the choice citing the idea as anti religion

Some from Bollywood including yesteryears’ heartthrob Raveena Tandon too took to Twitter to slam the actress.

I respect her decision to quit,announce to her fans,her life,her choice.would’ve been more graceful if she had not condemned all as the reason for doing so.discovering spirituality is beautiful,but don’t demean others.When girls in industry are wronged, I’m the first to protest. https://t.co/DV8KVU3bfi

Did #ZairaWasim pass out from #Madrassa ? As these days I see disturbing videos of Maulvi trying to molest Muslim girls 😜Also former actress Nagma a Muslim ? If yes why is she working in politics ? She is interacting with men & roaming without Burqa 😉 #MondayMood #PayalRohatgi pic.twitter.com/Bmq98a9N8V

However, the Twitterati’s opinion on the topic seemed severely polarised.

Many, including the former Chief Minister of Jammu & Kashmir state Omar Abdullah, backed the actress stating that her personal decision and privacy should be respected.

Amazing hypocrisy being exposed on #ZairaWaseem for heaven’s sake calling her act regressive is hardly tantamount to denying her choice.

Who are any of us to question @ZairaWasimmm’s choices? It’s her life to do with as she pleases. All I will do is wish her well & hope that what ever she does makes her happy.

I always respected @ZairaWasimmm's decision to be an actor.

Perhaps no other Kashmiri has achieved such an iconic status, such success and fame, at such a young age.

And today, as she quit the industry, I have no choice but to respect her decision.

The Indian film industry is not new to participation by actors and actresses from the Muslim community.

Among few notable actresses of Muslim faith are Waheeda Rehman, Mumtaz, Madhubala, and Tabu. These actresses have not only had great careers in the film industry but have won numerous awards at national and international forums.

Zaira became a household name in the Kashmir valley with her movie ‘Dangal’ starring Aamir Khan, also a Muslim actor. The latest movie that Zaira starred in, titled 'The Sky is Pink' is set to be released soon.