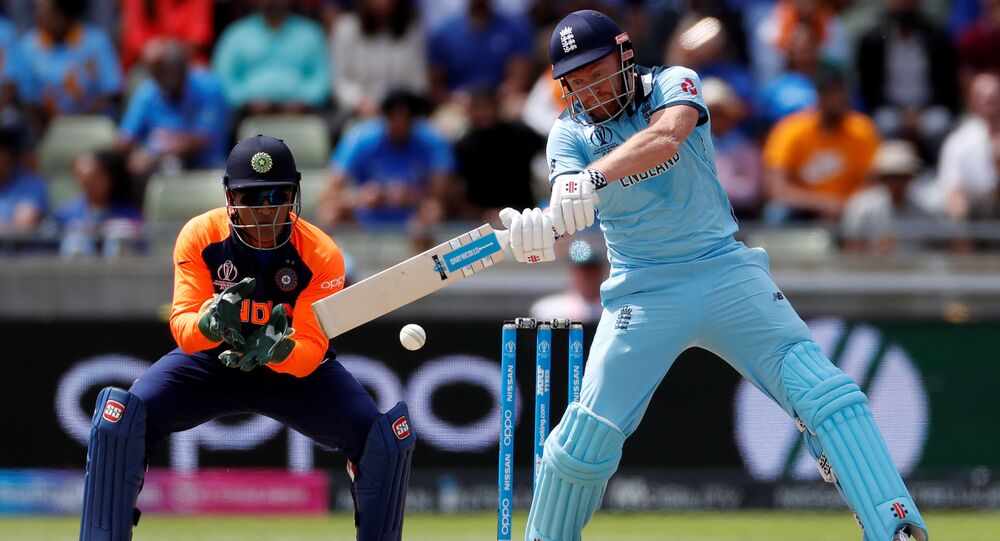 New Delhi (Sputnik): Team India's winning streak in the ongoing International Cricket Council's Cricket World Cup witnessed its first loss, to England's team on Sunday. The loss has been attributed to wardrobe failure: the famed 'Men in Blue' were sent to the pitch in Saffron jerseys. Some political leaders believe the move was influenced by an initiative launched by the ruling Bharatiya Janata Party (BJP) to 'saffronise' things.

'Saffronisation' is an Indian political neologism named after the saffron robes worn by Hindu ascetics which has been used by critics to ridicule right-wing nationalists for policies which seek to glorify the nation’s religious and cultural history.

Mufti’s tweet on Sunday night ignited the ongoing protests against Team India’s new jersey by opposition parties, who had earlier doubted a BJP hand being behind the “Hindu nationalist” saffron colour of the new kit.

Call me superstitious but I’d say it’s the jersey that ended India’s winning streak in the #ICCWorldCup2019.

Numerous BJP leaders have slammed Mufti for her tweet with the party’s Jammu and Kashmir chief, Ravinder Raina, reportedly stating that Mufti’s “heart bleeds for Pakistan”, which is why she spoke against Indian team's jersey.

Meanwhile Sanjay Raut, a key figure from BJP’s parliamentary ally, Shiv Sena party, also lashed out at the controversy over the saffron jersey, questioning Pakistan’s poor performance at the World Cup in spite of wearing “green” jerseys. The colour green is associated with the Islamic faith and the flag of Pakistan.

"If that is the case, Pakistan wears a green jersey, why are they losing? Their players have grown their beards to look like clerics -- that is why they are losing. In our country, there are some crazy people who want to ruin India's name." Raut was quoted by India Today daily as saying.

Mehbooba Mufti feels orange jersey is responsible for our loss!

From saffron terror to orange bringing bad luck to Indian team- this isn't about the colour but to somehow link it to a larger narrative to put the Hindu community on trial & appease minority! Sick politics

Hmmm. So Pakistan going down in every sphere is due to the green Pakistani flag? And PDP is losing elections due to the Islamic flag @mehboobamufti wears on her head https://t.co/3BI6HiAkyx

Some were flabbergasted by the fact thatthe leader could associate any team’s performance with the colour of their jersey.

Call me superstitious, but Pakistan coming in support of “India” made us lose the match.https://t.co/ebGhr513BS

You have all right to talk nonsense. You are known for the same. Tell me onething, Why didn't your party win a single seat in J&,K in loksabha 2019 election after wearing all favorite clothes.

Call me superstitious but Kashmir is doomed as long people like you, with limited intelligence, consider yourself ‘leaders’....

Indian opposition parties like Indian National Congress and Samajwadi Party recently suggested the BJP-led Indian government was behind the decision.

Team India’s jersey was officially changed by the Indian cricket board (BCCI) from blue to saffron for Sunday’s encounter as the English team's blue uniforms were too similar to India's. According to the International Cricket Council (ICC), in international tournaments, no two teams can wear uniforms with a similar colour.