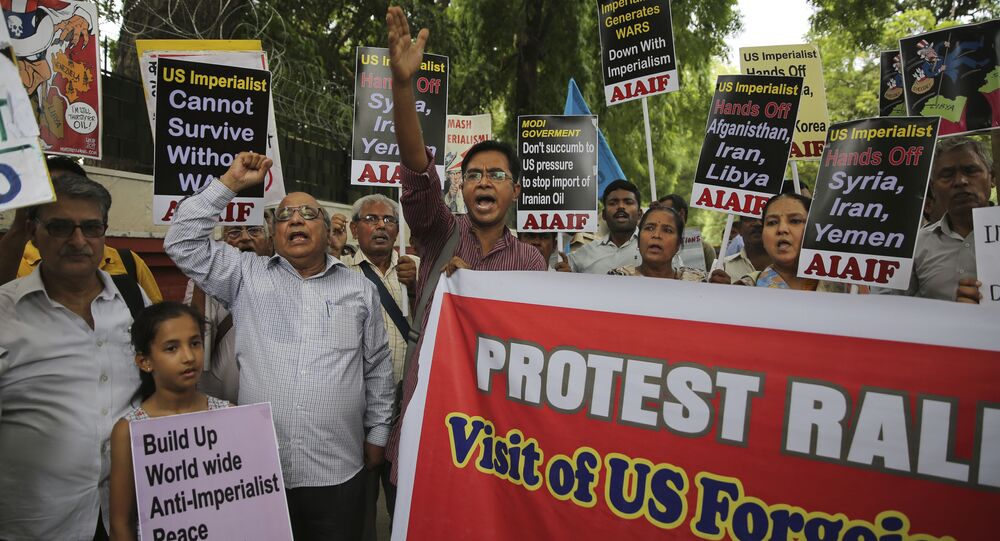 US foreign policy has become a hot-button topic during a massive protest in Delhi in the run-up to US Secretary of State Mike Pompeo’s official visit, which comes as part of his wider tour to negotiate joint counter-action against Iran.

Hardly had the US Secretary of State arrived on scheduled in Delhi when hundreds of left-leaning citizens marched in India’s capital protesting his visit and condemning American policies in the Middle East.

The protesters held banners saying “No war on Iran” and rhythmically shouted out slogans such as  “hands off Iran.”

One of the members of Parliament spoke to Sputnik saying it is the people of India who are really “dictators”, ascertaining however that the Indian government “succumbed to American dictates.”

“So we believe that it is high time to tell the rulers of America as well as India that India’s foreign policy is based on peace, solidarity and friendship with other nations in a principled manner, “ he asserted, before drawing a suggestive line between Indian and US policies:

“American foreign policy is based on war, on the arms trade, on killing, on arm-twisting. That just happens, “the protester pointed out, stressing that there is no way India should be a partner “to such a disastrous foreign policy.”

The man proceeded to clearly articulate the protesters’ demands:

“That is why when the American Secretary of State comes to India, we would like to tell him that India is not made just for American policies- India is India!”

Pompeo is on a widely-watched state visit to India after a similar one to Saudi Arabia and the United Arab Emirates, where he held meetings with high-ranking officials to discuss building a global coalition to strike back against Iran. Pompeo’s visit is historic since it is the first high-profile trip by a senior White House official to the South Asian country since Prime Minister Narendra Modi’s re-election.

Pompeo, who is scheduled to meet his new counterpart S Jaishankar on Wednesday, is expected to lay the groundwork for the upcoming meeting between President Trump and Prime Minister Modi later this week at the G20 in Japan.

Pompeo’s visit received particular media and public attention as it comes on the backdrop of severe trade tensions between the two countries, both of which are trying to promote the manufacture of local goods. Other points of contention between India and the United States include Russian arms sales to India and US limitations on China’s telecom giant Huawei.

US to Increase Diplomatic Isolation, Economic Pressure on Iran - Pompeo