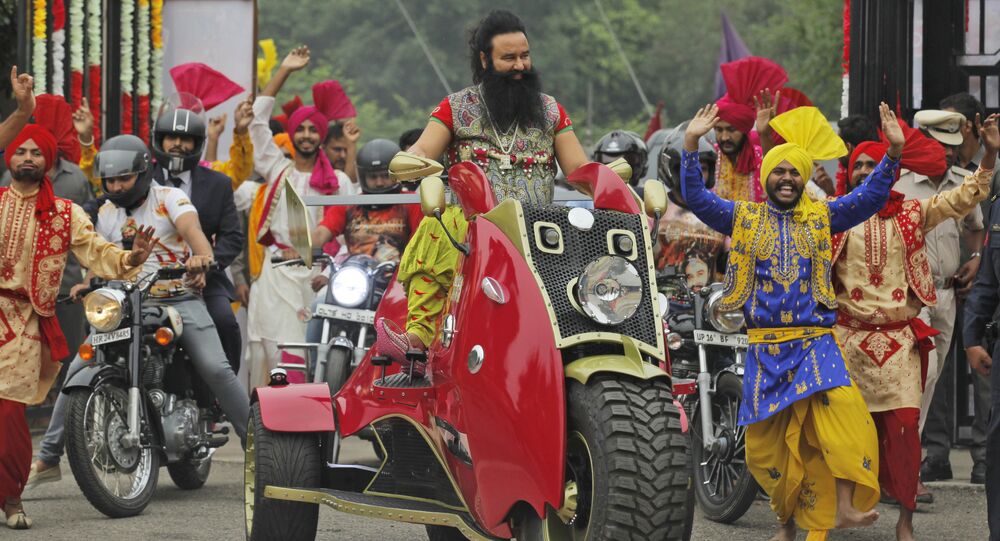 New Delhi (Sputnik): The controversial Indian guru Gurmeet Ram Rahim convicted in rape cases is set to be paroled from Haryana State Jail. In August 2017, an Indian court sentenced him to a total of 20 years in prison which led to wide-scale protests by his supporters.

News suggesting that Gurmeet Ram Rahim, the controversial Indian guru convicted of rape, is to be paroled from jail has sparked a row on social media.

The self-styled guru, known for his unique acting skills in Bollywood movies and flamboyant lifestyle is currently serving a 20-year prison term in the Indian state of Haryana.

While the Haryana state court had previously warned against his release, the Bharatiya Janata Party (BJP) ruled State government has supported the granting of parole which the guru had sought to attend his foster daughter's wedding, citing his “good behaviour” in prison.

Many celebrities, activists and netizens are ferociously protesting against his release, accusing the ruling BJP government in Haryana of releasing the guru to appease his ardent followers before upcoming state elections.

#DontSpareRapistBaba was the 3rd most popular trend on Indian twitter.

What he did in last 20 years is immmaterial till elections#JaiAryavarthttps://t.co/ZgjU6WkROI

No common criminal wages a war against a state by unleashing caches of weapon and artillery, rioting against the complete state machinery- this man can’t be treated like a common criminal. He will always b a tainted rapist and a murderer. #BabaRamRahim

When crime against women on rise , this will certainly give a wrong message. This will set such a bad precedent.
"Haryana government recommends parole for rape convict Ram Rahim | City" https://t.co/HtSfJxuQxh

BJP leaders walked in support of the convicted kathua rapists.

Why does BJP have a soft corner for rapists?https://t.co/Kzr3pwlobA

So the BJP govt in Haryana seems more than ready to release rape convict Gurmeet Ram Rahim on parole. Official reason given? Everyone has right to parole and Rahim wants to do farming 20 days a month! Real reason? It's an election year in Haryana yaar, Dera gets you votes!!

For all you know, the BJP in Haryana may also offer him a ticket to contest polls ?@Haryana_YC @INCHaryana @AshokTanwar_INC
https://t.co/qQkQCEFH1b

Ram Rahim’s millions of followers, meanwhile, cheered about the likelihood of his release calling him “innocent” and “falsely framed”. In fact, #BabaRamRahim was the no.1 Trend on Twitter in India for most of Monday.

#BabaRamRahim has always respected the Indian court of law and cooperated fully with the government and legal judicial procedures as and when required. Now that He had applied for parole, his legal rights must be honoured and he should be given parole

One of the tasks of humanity welfare by Guruji is to save the daughters by teaching them and making them a good person, by seeing who can be said that baba ram Rahim is innocent. #BabaRamRahim

I just want to know why a single picture of #BabaRamRahim from #SunariaJail didn't come out till date? Why he didn't get parole even the big names of bollywood who was convicted for serial blast got parole? Why law is not equal for everyone?

Some of his followers want to know why certain Bollywood celebrities managed to get paroled while serving their jail terms while their “beloved” guru hasn't been allowed to walk out of prison.

I just want to know why a single picture of #BabaRamRahim from #SunariaJail didn't come out till date? Why he didn't get parole even the big names of bollywood who was convicted for serial blast got parole? Why law is not equal for everyone?

Sanjay Dutt, Salman khan, Manu Sharma, chotala they all were granted with Parole, and none of the above mentioned has done great for society as much as #BabaRamRahim did and his followers are still doing under his guidance.

Meanwhile, Haryana state government Jail Minister K.L. Panwar has given a statement saying that all prisoners in the state have the right to seek parole.

"Every convict has the right to seek parole after a year. He made a request which we forwarded to the Sirsa district administration. Further action will be taken based on the report. Do not link this with elections. If we had such an intention we would have released him before Lok Sabha (parliament) elections. The government has no such intention," Panwar was quoted as saying by India Today.

In August 2017, an Indian court sentenced the guru to a total of 20 years in prison, 10 years for each of two rape convictions, to be served in consecutive terms. His arrest had led to wide-scale protests by his followers that had to be controlled by police force action.

Haryana is headed for state assembly elections in four months, and the supporter base for Gurmeet Ram Rahim is immense across Haryana.