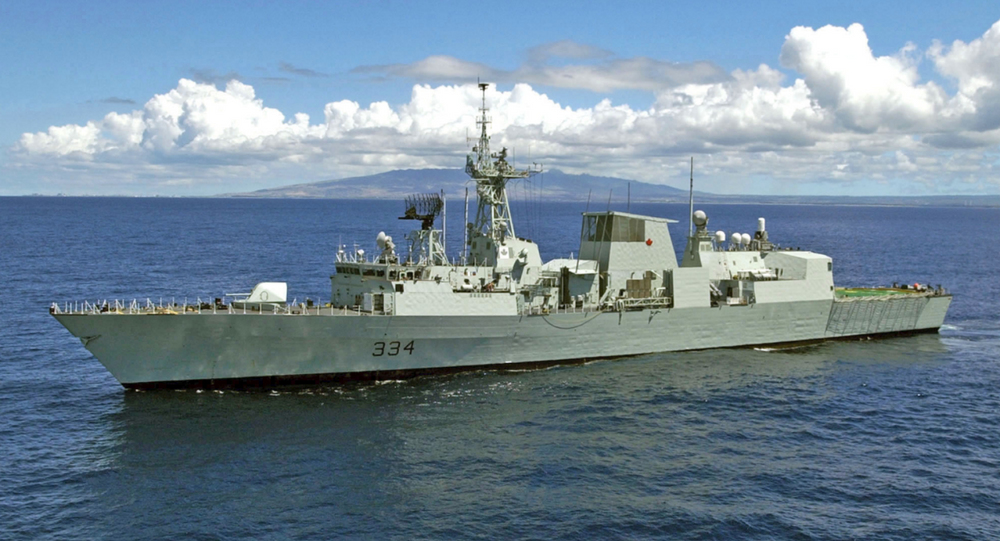 Canada recently became the latest nation to sail a frigate through the Taiwan Strait, a move which government officials have indicated was not intended to be taken as Ottawa making a statement against China.

The HMCS Regina, one of 12 frigates operated by the Canadian navy, and the Naval Replenishment Unit Asterix sailed through the contested waterway on Tuesday after departing from Cam Ranh Bay in Vietnam.

Website Marine Traffic shows the frigate traveling from the South China Sea through the Taiwan Strait in the direction of the East China Sea. According to Navy Recognition, both the HMCS Regina and the Asterix are part of Operation NEON, a mission to ensure that UN sanctions against North Korea are being enforced.

Taiwan’s Ministry of National Defense has stated that the passage of both ships was carried out as part of a freedom of navigation operation.

Jessica Lamirande, spokesperson for Canada’s Department of National Defense, told the Globe and Mail that the only reason the ships sailed through the area was because it was simply “the most practical route between Cam Ranh Bay and Northeast Asia.”

“Transit through the Taiwan Strait is not related to making any statement,” Lamirande noted.

Although Taiwan has been a self-governing island nation since 1949, China sees the country as a wayward province needing to be brought back into the fold - even by means of force, if necessary. Taiwan has repeatedly rejected China’s stance.

Per China, ships looking to pass through the region should request permission first, despite the fact that international law indicates that the area is an open waterway.

The ships’ transit comes at a time when tensions between China and Canada are simmering over the recent arrest of Huawei CFO Meng Wanzhou and subsequent detainment of two Canadians in China.

Although Lamirande did say that the transit wasn’t meant to send a message to China, experts are on the fence regarding the matter.

Stephen Nagy, a senior associate professor of politics and international studies at International Christian University in Tokyo, told military website Stars and Stripes in an article published Thursday that Taiwan Strait transits are “very indirect signals” of disapproval toward China’s claims in the region.

“Middle powers [like Canada] are about bolstering international institutions and international law so they can restrain the power of very big countries,” Nagy told the outlet. “They view that China is going to present a bigger risk going forward, and they have to demonstrate some resolve through ships in the region.”

“I think sailing through the Taiwanese strait is part of a broader expansion of Canadian naval activities in the Indo-Pacific,” he added.

Similarly, Guy Saint-Jacques, a former Canadian ambassador to China, told the Globe and Mail that Ottawa’s move is the start of the “new Canadian position towards China.”

“The Trudeau government is starting to assert itself more, and questions like freedom of navigation are important ones,” Saint-Jacques said. “It sends the signal that Canada is aligning with the US and with other countries like Australia and France that have sent ships to the Taiwan Strait – that freedom of navigation is important and that we don’t recognize Chinese claims to sovereignty in that part of the world.”

The US is no stranger to freedom of navigation passages through the Taiwan Strait. In fact, the US has conducted one each month in 2019, except for the month of June. The most recent transit occurred on May 22 and involved the Arleigh Burke-class destroyer USS Preble and the Navy oil tanker USNS Walter S. Diehl.