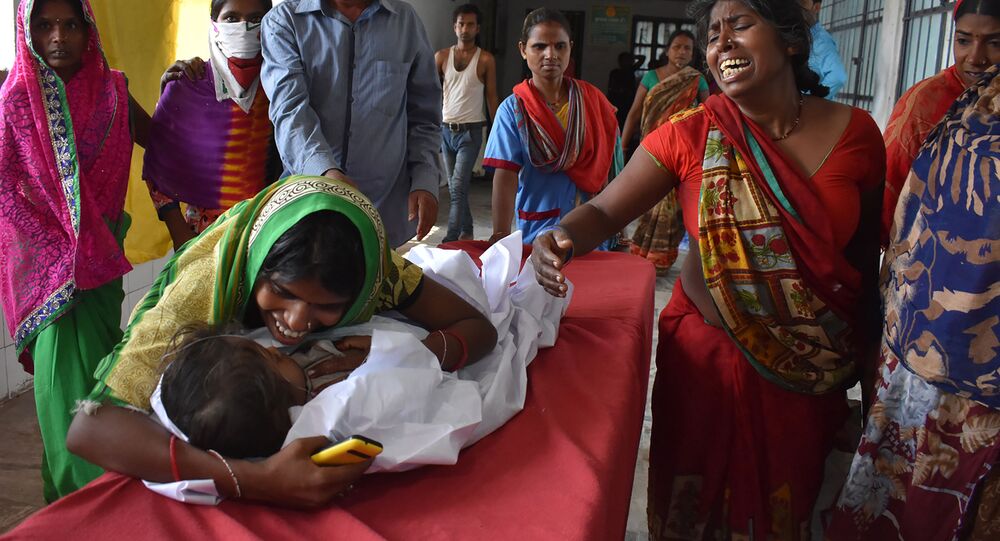 Public protests greeted the Chief Minister of the Indian State of Bihar on Tuesday as he visited the town of Muzaffarpur to survey the community, which is currently battling an Acute Encephalitis Syndrome (AES) epidemic that has claimed 108 lives since the first outbreak.

Agitated protesters gathered outside the government-run Sri Krishna Medical College and Hospital (SKMCH) and chanted slogans critical of Chief Minister Nitish Kumar and his Deputy Chief Minister Sushil Kumar Modi, demanding that they go back to the state capital Patna.

People were furious and blamed their leaders for their ineffectiveness in containing or taking preventive steps in response to the disease.

Both leaders visited the hospital to meet children undergoing treatment and their anxious parents, as well as to take stock of the overall situation with the doctors present there.

They, however, avoided talking to the media as they left the premises. Deepak Kumar, Bihar's Chief Secretary, told the media that the state government has taken all the requisite steps to handle the situation, denying negligence of any kind.

He said that Bihar's chief minister has issued several instructions after chairing an internal meeting among senior officers.

The measures being given priority include: sending separate teams to each of the homes of the 400 affected children to examine the socio-economic and environmental conditions that they are living in; ensuring the timely delivery of medical-grade oral rehydration solutions (ORS); providing ambulances free-of-cost, and reimbursing transit costs to anyone coming to the hospital in a private vehicle; ensuring the quick and timely treatment of patients; calling in more medical teams from outside the state to deal with the medical emergency, and increasing hospital beds capacity, especially in the intensive care units (ICU).

Meanwhile, the central government on Tuesday decided to send another high-level multi-disciplinary team to the state of Bihar to undertake the necessary groundwork for the setting up of a state-of-the-art multi-disciplinary research centre in Muzaffarpur.

According to a Health Ministry release, the research team will also look into various aspects of encephalitis, including periodicity, the cycle of disease, environmental factors, data measurements and other factors.  Five virological laboratories will also be set up in different districts of Bihar. The state government has been instructed to set up a 100-bed paediatric ICU at the Sri Krishna Medical College and Hospital and 10-bedded paediatric ICUs in adjoining districts.  Central government support will be provided for this.

Reactions to the protests were also visible on social media.

Mr. Prime Minister @narendramodi there is a genocide going on in Bihar and all dying people are kids. Can you hear me Mr. Prime Minister? #Bihar CM #NitishKumar seems sleeping, can you please intervene to stop this

Journalist: It's been 8 days, the disease has already claimed 150 lives and counting. Why hasn't the CM visited the hospital yet?

​As of Tuesday morning, at least 89 children had died of suspected encephalitis at the Sri Krishna Medical College and Hospital and 19 had died at Kejriwal Hospital in Muzaffarpur.

The total death toll caused by the disease in Bihar currently stands at 127.

Officials initially said the deaths are being caused by hypoglycemia, a condition caused by a very low level of blood sugar, and not by encephalitis, as was reported by the media.

Another reason offered was that the children were dehydrated and had low glucose levels, and were sleeping on empty stomachs amid exceptionally hot weather.

The state health department has also advised parents not to feed their children Lychee fruit on an empty stomach and to avoid half-ripe or unripe Lichis.

The state government has already announced that Rs. 400,000 in compensation would be provided to the next of the kin of the deceased.

The National Human Rights Commission of India (NHRC) has issued notices to the government of Bihar and the Union Health Ministry, requesting a detailed report on the deaths.