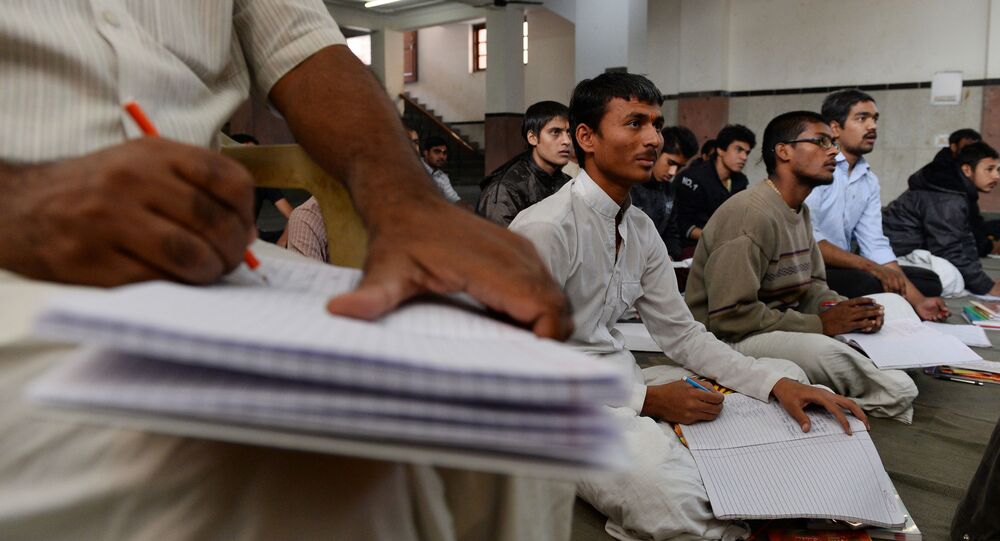 As a language of ancient India, Sanskrit has a 3,500-year-long history. It is a language used in most works of Hindu philosophy and the principal texts of Buddhism and Jainism. It has also had an influence on poetry, music, drama, scientific, and technical learning. Today, over 50 million students study Sanskrit at school in the country.

New Delhi (Sputnik): A proposed plan by the Indian government to create at least two Sanskrit-speaking villages near institutions of the language in the country has evoked mixed reactions on social media.

Presiding over a meeting of heads of central language institutions in the Indian capital city of New Delhi this week, the country's Human Resources Development Minister Ramesh Pokhriyal Nishank said there is a need to engage more qualified Sanskrit teachers and professors to give new dimensions to this ancient language, as well as to promote it both at the national and international level.

This is a brilliant idea. 2 villages should be just about enough to hold every last Sanskrit Speaker in India. While they entertain themselves in Sanskrit in this rural idyll, the rest of India can return to the gritty reality of making a living. https://t.co/Kxr1tbqAmH

Dear Sir, Herein I render my respect to Your for Your Nobel gesture to developed two villages in India to give Top priority & importance to our old & indigenous Sanskrit Language. Please be Active in this regard until & unless You reach to targeted Goal. https://t.co/PxihHpQq6R

Instead of such lip service gimmickry why not lay out a roadmap to make Sanskrit our one & only national language within a fixed time frame?https://t.co/4fp0Z9TcDS

Some netizens opposed the government's plan for Sanskrit.

Sanskrit was never used as mass speaking language. An attempt to start it on model villages will be a fools idea. As God's language Sanskrit has prevented common man to understand essence and teachings of ancient Rishis. This knowledge has remained inside intelligent people.

Sanskrit speaking villages will appeal only to Brahmins!Waste of time! It's a dead language!

​Meanwhile, the Nishank has asked officials of his ministry to meet with heads of these language institutions regularly and discover innovative ways to promote Indian languages.

In 2016, a Ministry of Human Resource Development-appointed 12-member committee prepared a 10-year road map for the promotion of Sanskrit. In its 32-page recommendatory report, the then committee defined Sanskrit as the "voice of India's soul and wisdom".

A National Sanskrit University funded by the HRD Ministry has been implementing schemes for the propagation of the Sanskrit language and literature. It provides financial assistance for the publication and re-printing of rare books. It is also supporting Sanskrit teachers and scholars through cash rewards for exemplary work.