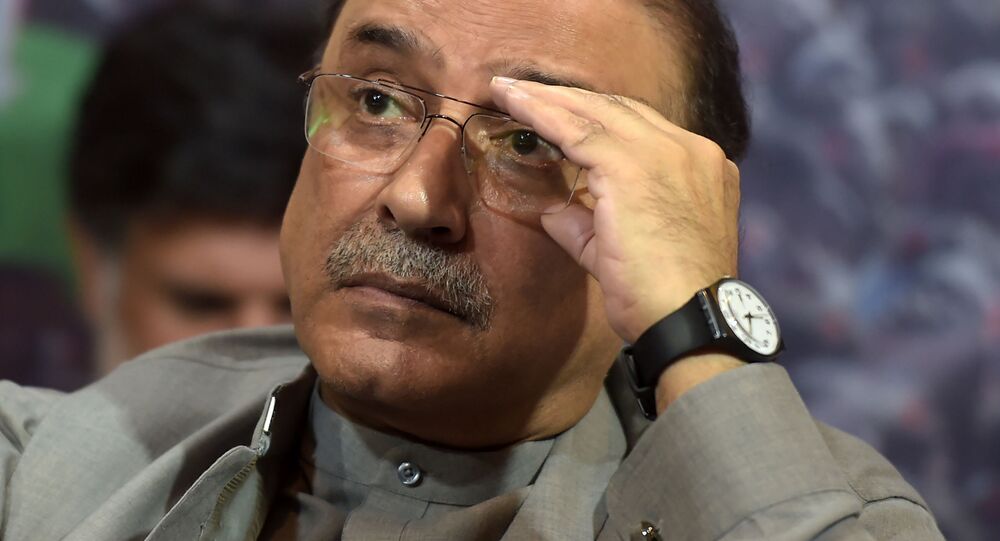 Asif Ali Zardari, the husband of late ex-Pakistani prime minister Benazir Bhutto, allegedly opened hundreds of bank accounts in the names of labourers, security guards, and other poor people of the country by influencing his power and position as president and political leader of a ruling party to launder money.

New Delhi (Sputnik): Former Pakistan president and co-chairman of country's main opposition party, Asif Ali Zardari, was arrested on Monday along with his sister by senior anti-corruption investigators in connection with a bank fraud case. The arrest of the Pakistan Peoples Party's (PPP) co-founder Zardari, husband of Benazir Bhutto, came following the Islamabad High Court turning down an anticipatory bail application filed by Zardari and his sister — Faryal Talpur — in the fake accounts case.

Both of them will be under the National Accountability Bureau (NAB) team's custody until the duo get any relief from the Supreme Court of Pakistan. Zardari was president from 2008 to 2013.

"After dismissal of bail petition by the Hon'ble Islamabad High Court and in pursuance of warrant of arrest issued  by chairman NAB, this Bureau is going to execute the said warrant of arrest of accused Asif Ali Zardari," the order reads.

Pakistani Interior Minister Ejaz Shah denied the accusation made by the opposition party that the government played a role in Zardari's arrest.

Host photo agency
Pakistan PM Resigns After Supreme Court Corruption Probe Ruling
The case came to light two years ago when the State Bank of Pakistan found irregularities and reported them to the Federal Investigative Agency. It was found in an investigation, produced before the Supreme Court, that through this dirty money, the Omni Group (allegedly owned by Zardari and his close aides) acquired four state-run entities — Thatta Cement Factory, Thatta Sugar Mills, Naudero Sugar Mills and Dadu Sugar Mills — in the country's Sindh Province at throwaway prices.

In the investigation, which was completed in several parts, it was also established that Zardari amassed immense wealth by using his influence over the banking system during his tenure as president of Pakistan and during his party's tenure as the ruling government.