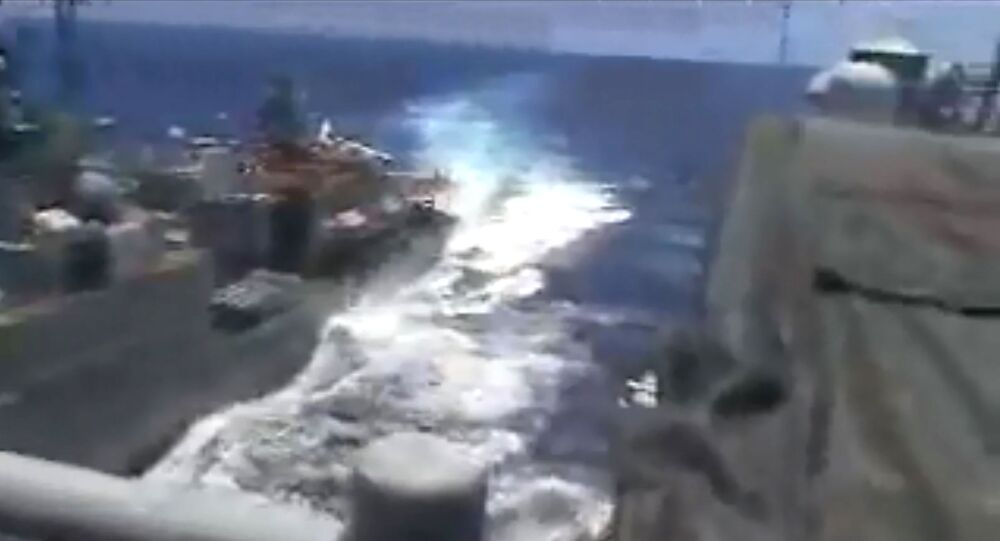 The Russian Pacific Fleet earlier accused a US Navy cruiser of performing a dangerous manoeuvre near a Russian Destroyer in the Pacific.

The US Navy has released a video of the near-collision between the Russian destroyer Admiral Vinogradov and the USS Chancellorsville in the East China Sea in an incident that took place earlier in the day.

BREAKING: #USNavy has released video of #USSChancellorsville being forced to maneuver to avoid collision, after #Russian destroyer Udaloy I made an unsafe and unprofessional approach in the Phillippine Sea, June 7th. (1/2) pic.twitter.com/HpmAMtYraS

BREAKING: #USNavy has released video of #USSChancellorsville being forced to maneuver to avoid collision, after #Russian destroyer Udaloy I made an unsafe and unprofessional approach in the Phillippine Sea, June 7th. (2/2) pic.twitter.com/bM9ZHuYSUM

Meanwhile, CNN Pentagon correspondent Barbara Starr has shared the first image of the warships’ encounter, with the Russian destroyer pictured on the left, and the US cruiser on the right.

FIRST IMAGE of US Navy warship having a close encounter with Russian warship earlier today in East China Sea https://t.co/KDhBWmy54a

The Russian Pacific Fleet issued a statement on Friday, saying that the US cruiser suddenly changed its course and crossed the path of the Russian destroyer “just 50 metres away from the ship”.

According to the statement, Admiral Vinogradov was forced to perform urgent manoeuvres in order to avoid a possible collision.

In response, the US Seventh Fleet has brushed off Russia’s accusations, saying that it was the Russian vessel that nearly caused a collision.

"While USS Chancellorsville was recovering its helicopter on a steady course and speed when the Russian ship DD572 manoeuvred from behind and to the right of Chancellorsville accelerated and closed to an unsafe distance of approximately 50-100 feet. This unsafe action forced USS Chancellorsville to execute all engines back full and to manoeuvre to avoid collision", the Seventh Fleet’s statement read.

The US Navy also said that the incident happened in the Philippine Sea, not in the East China Sea.