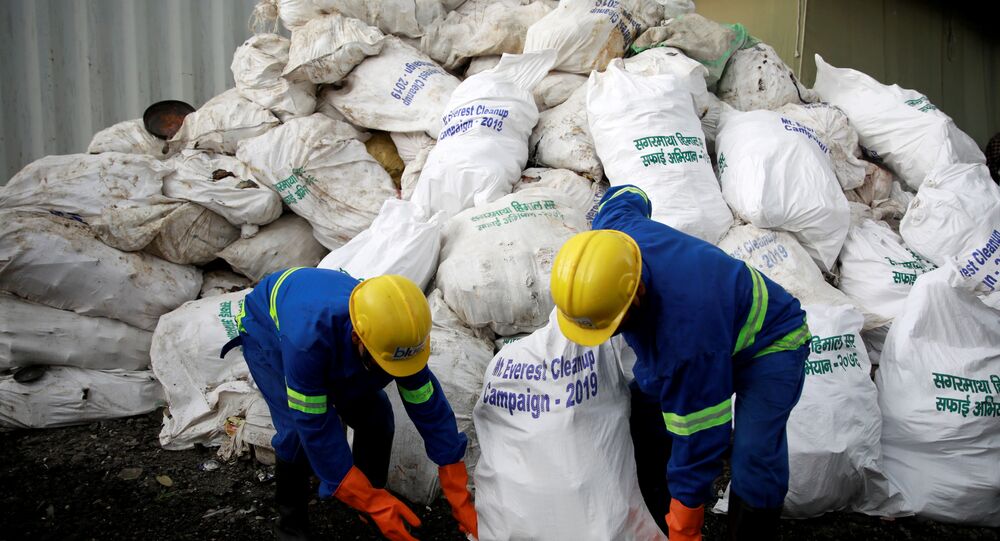 The Nepalese government’s ongoing campaign to retrieve man-made waste from Mount Everest has exceeded expectations, collecting nearly 11,000 kilograms of trash, as well as a number of corpses.

"Unfortunately, some garbage collected in bags at the South Col could not be brought down due to bad weather," the official admitted.

Waste discovered on the mountain from past climbers is said to be decades-old and includes, but is not limited to: human feces, empty oxygen tanks, discarded tents, ropes, food and beverage cans, broken ladders and plastic wrappers.

Ghimir noted 5,000 kilograms were collected in April and May from sites above the base camp, while the other 6,000 kilograms came from areas beneath.

At its inception, the "Everest Cleanup Campaign," pledged to remove 10,000 kilograms of waste from the mountain. It's not clear when Sherpas will be able to retrieve the remaining bagged trash.

As the snow melts, bodies of climbers and Sherpas who did not survive their expeditions are becoming more visible. Speaking to Reuters, cleaning campaign coordinator Nim Dorjee Sherpa revealed two bodies were found in the notorious Khumbu Icefall, and Sherpas uncovered the other two at Camp 3.

Officials have not been able to identify the corpses or determine the time of their treks. It's estimated around 300 bodies remain on Everest.

Eleven people have died on Everest this year. Weather conditions and brief summit windows caused a record nine individuals to lose their lives on the mountain last month, and this year's death toll is the highest since the 2015 climbing season, which saw 19 fatalities.

Despite the deaths and sale of a record 381 permits to summit the mountain at $11,000 a pop, it's unlikely that a new ticketing system will be put into place. In his Wednesday statement, Ghimire said congestion was not to blame for the fatalities.

Last month, following the posting of a now-viral image of the crowded summit by climber Nirmal Purja, individuals such as UN Patron of the Wilderness Ben Fogle have called on Nepal to consider introducing a threshold on the number of tickets available in a climbing season.

Ed Dohring, a US doctor who summited in May, asserted to the New York Times that Mt. Everest was "like a zoo" due to overcrowding and claimed that during one point in the trek he had to step over the body of a recently deceased woman.