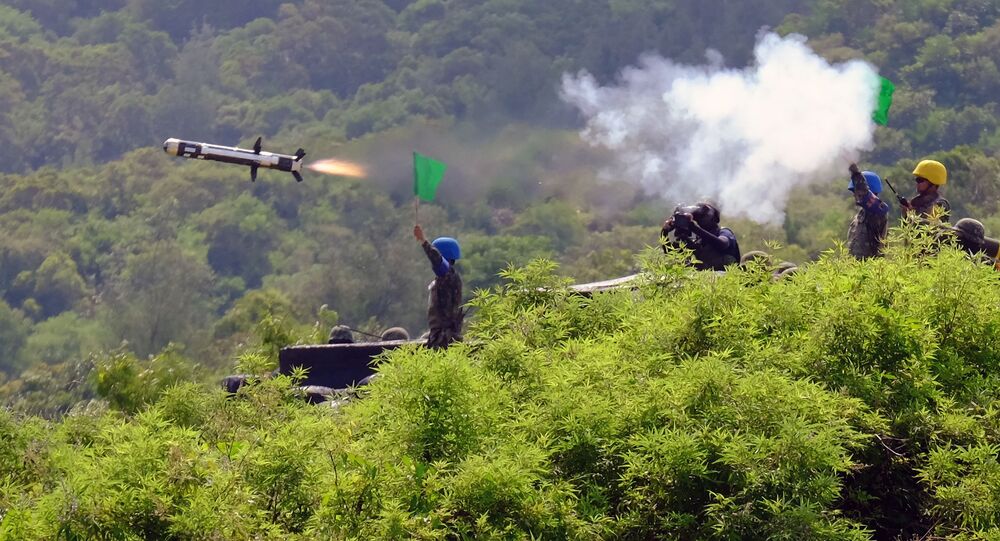 Relations between Washington and Beijing have been actively spiralling downward for the last two years over an array of issues: from an ongoing trade war and the banning of Chinese companies from the US market to numerous "provocations" by the American military in the South China Sea, specifically in the Taiwan Strait.

The US government is preparing a deal to sell $2 billion worth of military equipment to Taiwan and has already informally notified the US Congress about the said deal, Reuters reported citing four anonymous sources. The US State Department has refused to comment on the report, while Taiwan’s Defence Ministry noted that it indeed requested weaponry from Washington.

© AP Photo / Yong Teck Lim
China’s Defence Minister on Trade War, Taiwan: ‘We Will Fight to the End’ if US Want It

According to the sources, the possible arms sale will include 108 M1A2 Abrams tanks set to replace the aging M60 Pattons, 409 Javelin and 1,240 TOW anti-tank missiles. Additionally, the deal may include the supply of 250 missiles for Stinger anti-aircraft missile launchers.

The news was not well received in China as Beijing views Taiwan as a part of its territory, with the Foreign Ministry's spokesman Geng Shuang slamming Washington's alleged decision to fulfil Taipei's request for military supplies. The spokesperson warned that the move will not only hurt US-China ties, but also endangers the entire region’s stability.

"We are severely concerned about the US move and are firmly against US arms sales to Taiwan", he said.

The report comes in light of ongoing tensions between Washington and Beijing. Despite having no formal ties with Taiwan, the US continues to help it, including by sending warships to the Taiwan Strait region in defiance of China's warnings about doing so as well as selling weapons systems and equipment.

Washington also regularly sends its ships to the disputed waters of the South China Sea to conduct so-called Freedom of Navigation Operations. China, which controls most of the sea and has a strong military presence in the area, has criticised these exercises, calling them "provocations”. Beijing insists that its claims are legal and that all military installations in the South China Sea are purely defensive.

Apart from that, Beijing and Washington are currently engaged in a costly trade war, which has seen billions of dollars-worth of goods from both states being slapped with 20% and higher tariffs. The US and China are holding talks to lift barriers in trade, but President Donald Trump recently warned that new tariffs might be coming, citing a lack of progress in negotiations.