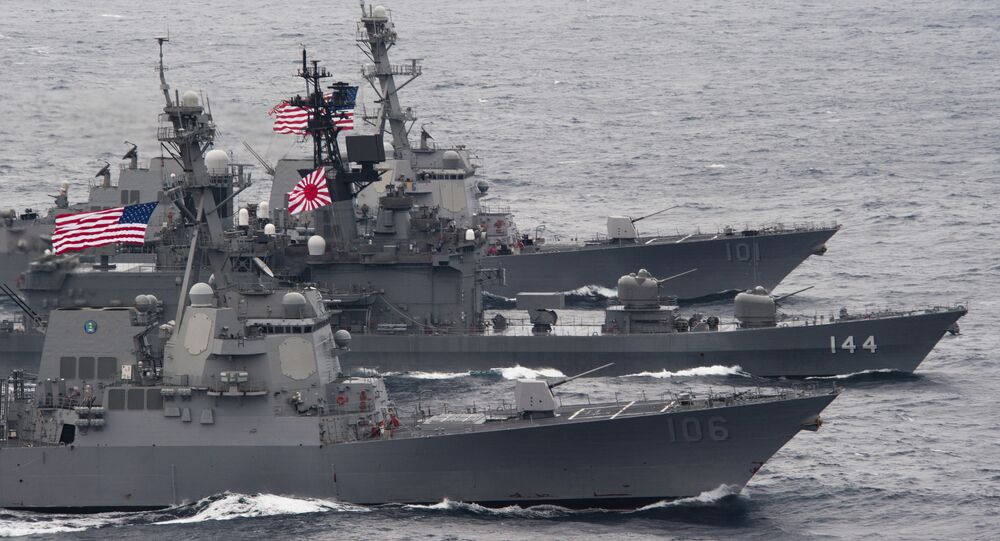 During a visit by Acting US Defense Secretary Patrick Shanahan to Tokyo earlier this week, Japanese Defense Minister Takeshi Iwaya said the two nations had agreed to cooperate in “new domains” in the Indo-Pacific region, including space and cyberspace.

"Japan and the United States need to use their resources to create a strong deterrent force to secure a competitive edge in the new domains," Iwaya told reporters Tuesday afternoon following his meeting with Shanahan, according to the Japanese paper Yomiuri Shimbun.

© AP Photo / Shizuo Kambayashi
Can Japan's PM Abe be a Mediator Between Iran and US?

The paper reported the two nations agreed on the need to promote collaboration across the region in order to halt China's expansion and end North Korea's nuclear and ballistic missile programs. The US and Japan will also cooperate on a space monitoring sensor to be installed on Japanese satellites by 2023, and that cyberattacks will invoke the US defense treaty with Tokyo just the same as a traditional attack.

However, Iwaya told reporters they didn't discuss North Korean affairs in detail, including the May 9 missile test.

"To hold operations… in such new areas as space, electromagnetic waves, and cyberspace, it is necessary to strengthen joint control," a government policy directive from December reads. "For constant supervision of space, for impeding rivals' command and information transmission, and also for… maintaining leadership in cyberspace use, it is necessary to create a special space unit within the air-force defense units, and to boost its joint control."

"To strengthen deterrence and the response capabilities of the alliance and realize a free and open Indo-Pacific, we hope to continue to work together and deepen our cooperation," Abe said.

Shanahan also met with Japanese Foreign Minister Taro Kono and Chief Cabinet Secretary Yoshihide Suga. The Japan-US alliance is "the cornerstone of peace and stability in the Indo-Pacific," Kono said.

On Monday, Iwaya met with his Chinese counterpart, Defense Minister Wei Fenghe, at the Shangri-La Dialogue in Singapore, where they discussed the need to create a mechanism to avoid clashes between the two countries in the East and South China Seas.

The two nations have disputed control over a chain of islands north of Taiwan known to the Japanese as the Senkaku Islands and the Chinese as Diaoyu. Tokyo presently controls the islands and has fortified them with missile installations to ward off Chinese ships and aircraft.