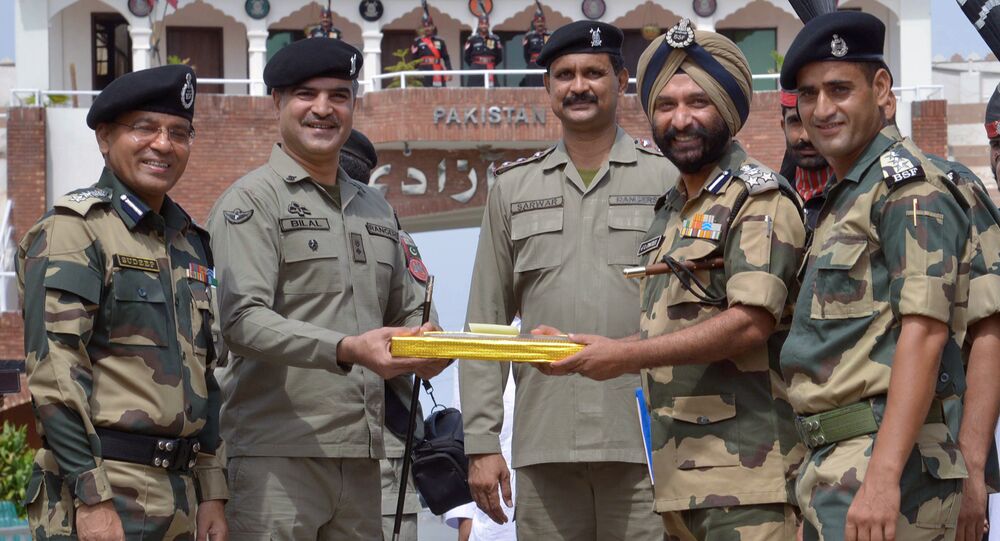 The troops of the two nuclear-armed South Asian nations had a bitter winter this year, when escalation broke out mid-February. The air forces of the two countries clashed on 27 February after the IAF launched an air strike targeting Pakistan’s Balakot area and allegedly destroyed terrorist facilities operated by the group Jaish-e-Mohammed.

New Delhi (Sputnik): Following a war-like escalation in mid-February and an exchange of gunfire across the Line of Control, troops from India and Pakistan on Wednesday exchanged sweets to commemorate the Islamic festival of Eid-ul-Fitr at several points along the border between the two countries.
The uncharacteristic holiday hiatus in hostility stood in stark contrast to the general mood that prevailed at the end of Ramadan last year, when India's Border Security Force and the Pakistani Rangers exchanged gunfire rather than sweets.

During the past month, the leaders of the two countries have exchanged pleasantries on several occasions, including the first-ever direct telephone call between the prime ministers. Pakistan Prime Minister Imran Khan called his Indian counterpart Narendra Modi to congratulate him following his victory in the country's general elections and expressed a willingness to work together for peace in the region.

The two leaders are likely to share a table at the Shanghai Cooperation Organisation (SCO) meeting scheduled to be held in Bishkek, Kyrgyzstan on 14-15 June. While there is no formal meeting scheduled between the two prime ministers as of now, its possible that they'll touch base again soon.