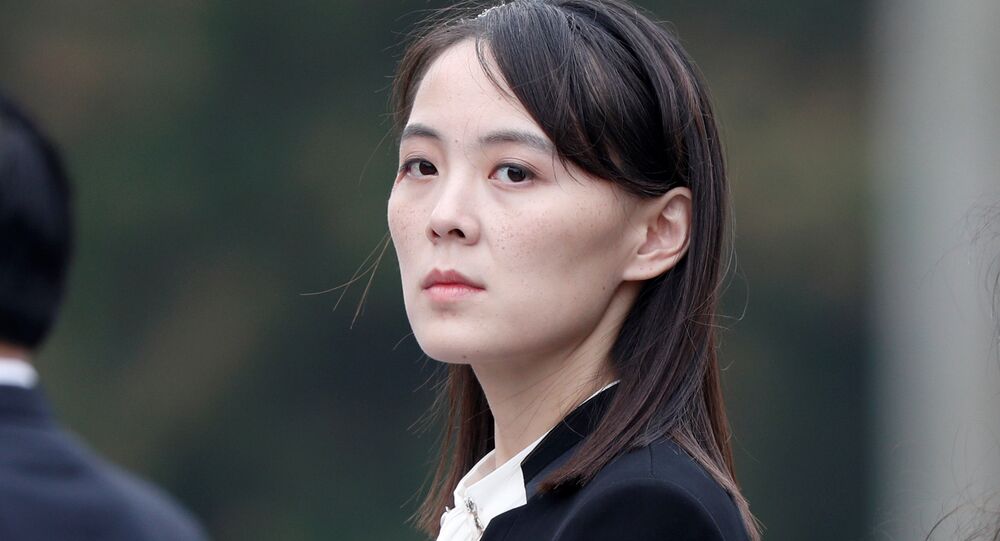 On Tuesday, Kim Yo Jong, North Korean leader Kim Jong Un’s sister, appeared in public for the first time in more than 50 days.

Kim Yo Jong was seen standing by Kim Jong Un at the 150,000-seat May Day Stadium in Pyongyang, watching thousands of people participate in the country's "Mass Games" by performing synchronized moves as part of the "Grand Mass Gymnastic and Artistic Performance."

Kim Yo Jong was appointed as the director of the Propaganda and Agitation Department of the North's ruling Workers' Party of Korea. She regularly attends her brother's distinguished events, such as his summits with US President Donald Trump.

Last week, South Korea's Chosun Ilbo newspaper stated that Kim Jong Un had asked his sister to not make public appearances after the failed meeting between him and Trump on June 12, 2018, in Singapore.

The second summit between Trump and Kim concluded with a deadlock in denuclearization talks — Washington demanded that Pyongyang completely dismantle its nuclear facilities in order to get sanctions relief, while North Korea wanted partial relief before it began denuclearizing.

Following the summit, North Korean leader Kim Jong Un and his government are said to have executed at least five Foreign Ministry officials, including Kim Hyok Chol, the country's envoy to the US, according to Chosun Ilbo. However, according to CEO of Korea Risk Group Chad O'Carroll, communication with an unidentified source contradicted Chosun Ilbo's report.

This week, a new report by CNN stated that Kim Hyok Chol may be alive and is believed to have attended an art performance alongside Kim Jong Un. An image published by state-run North Korean newspaper Rodong Sinmun appears to show Kim Hyok Chol sitting just a few seats from the North Korean leader. However, as the man in the picture is covering his face, it is not entirely clear whether he is in fact Kim Hyok Chol.