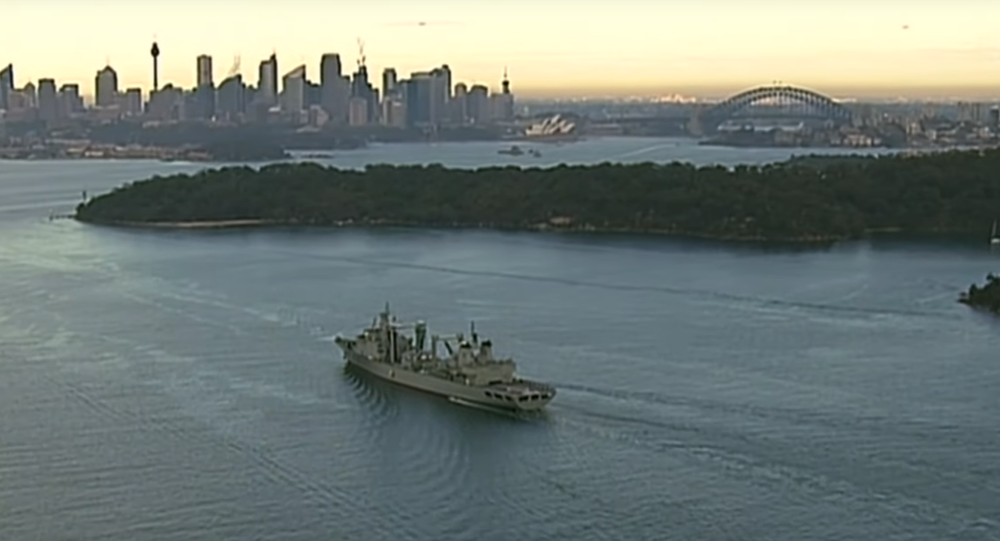 Chinese Warships Cause Stir During Stopover in Sydney (PHOTOS)

When a trio of Chinese warships sailed into Sydney Harbor Monday, it caused a bit of a stir, with many news outlets reporting it was a “surprise” visit while Australian Prime Minister Scott Morrison was overseas. However, Morrison reassured the public the port call was planned long in advance.

The ships and their roughly 730 sailors are returning to China from a counter drug trafficking mission in the Gulf of Aden off the coast of Somalia, and they stopped over as part of a goodwill mission.

​Nothing about the stopover is new: Chinese ships last visited Australia in 2017, and Australian ships visited China as recently as April 2019, when they took part in Beijing's celebration of the 70th anniversary of the founding of the PLAN. However, that didn't stop media figures and civilians alike from turning the visit into an ominous spectacle and symbol of growing Chinese power.

Rory Medcalf, head of the National Security College at Australian National University, took to Twitter to voice his immense displeasure with the visit.

This is actually quite something. Chinese naval visits to Australia have more typically been a lone frigate, not a task group with an amphibious assault ship and 700 personnel. Sydney is hardly a convenient stopover on their way home from the Gulf of Aden. What's the story here?

​"Chinese naval visits to Australia have more typically been a lone frigate, not a task group with an amphibious assault ship and 700 personnel," the scholar tweeted on Monday. "Sydney is hardly a convenient stopover on their way home from the Gulf of Aden. What's the story here?"

However, Medcalf soon answered his own question, tweeting that it "looks like a serious show of presence in the South Pacific."

It will be fascinating to learn why a Chinese navy task group, likely with PLA marines embarked, is in Sydney. Any claim they are just on their way home from the Gulf of Aden makes no sense. This looks like a serious show of presence in the South Pacific https://t.co/nbdqiTZmLP

​The city's daily paper, the Sydney Morning Herald, fumed Monday that the visit was happening "only 24 hours before the 30th anniversary of the Tiananmen Square massacre" and accused Canberra of "playing down" the visit.

The UK's Daily Mail called it a "secret visit," and Australia's Seven News reported it as a "surprise visit." Much has also been made of the fact that the ships arrived while the prime minister was on a state visit to the Solomon Islands, seeming to suggest the Chinese ships snuck in behind his back.

"It may have been a surprise to others, but it certainly wasn't a surprise to the government," Morrison said at a press conference in Honiara, the Solomon Islands' capital. While the government never announced the visit publicly, "we have known about that for some time," he said.

Noting it was a "reciprocal visit" following the visit of Australian ships to the People's Republic, Morrison warned that "any reading into timing could be subject to a bit of overanalysis."

Morrison's trip, ironically enough, was aimed at turning the Pacific island chain away from China by offering it a $173 million aid package, AFP noted. It was the prime minister's first overseas trip since his Liberal Party won the federal elections last month.

"The People's Liberation Army (PLA) Navy visit might have been intended as an act of diplomacy, but it's turning into a public relations disaster for China," John Fitzgerald, a China scholar at Swinburne University in Melbourne, told the South China Morning Post.

One reason for the soreness Down Under is that last week, a Chinese fishing vessel in the South China Sea forced several Australian helicopters flying from the Australian navy's flagship, the HMAS Canberra, to land during drills by pointing lasers at them, Sputnik reported.

The Australian Defense Force said in a statement, "Port visits are conducted by all navies to undertake basic logistics and resupply activities, low-level maintenance and provide valuable opportunities for crew respite," also noting, "The Australian Government is committed to maintaining a long-term constructive relationship with China, founded on shared interests and mutual respect."

However, that's not to say that Canberra doesn't see Beijing as a key regional rival. Australia's Naval Shipbuilding Plan, drawn up in 2017, laid out an ambitious $65.3 billion blueprint for naval expansion catered towards answering Chinese naval power in the Pacific and the South China Sea.

"While there is concern that Australia risks becoming a casualty of US-China rivalry, it is clear on both sides of politics that China, not the US actions, is to be feared," Binoy Kampmark, senior lecturer at the School of Global, Urban and Social Studies at the Royal Melbourne Institute of Technology, told Sputnik last August via email. What he called "striking," however, was the lack of criticism of Australia's huge recent outlays to upgrade its sea power, "other than [from] activist groups who insist that Australia is too closely aligned to Washington's interests."

"Australian diplomacy in recent years has been trying to capitalize on the fears of various Asian countries (Vietnam, Malaysia, Singapore) on the rise of China, though it always subordinates this to Washington's dictates," Kampmark said.