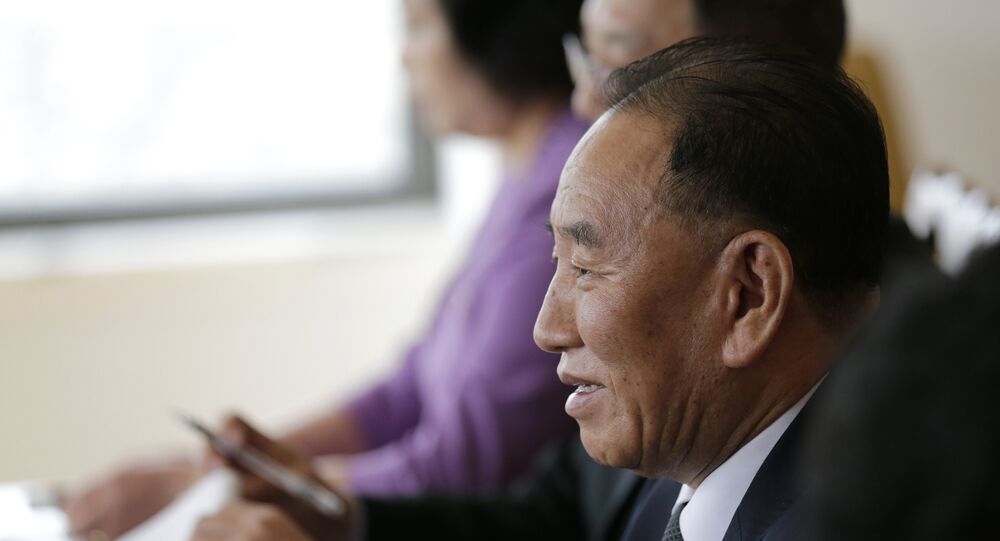 North Korean senior official and former top nuclear envoy Kim Yong Chol accompanied leader Kim Jong Un to a Sunday art performance, DPRK state media reported, despite the rumours that the former spymaster was repressed after the failure of the negotiations with the US.

Earlier on Friday, South Korean newspaper Chosun Ilbo reported that Kim Yong Chol, Kim Jong Un’s right-hand man and the counterpart to US Secretary of State Mike Pompeo before the failed Hanoi summit, had been sent to a labour and re-education camp in Jagang Province near the Chinese border, citing an unidentified North Korean source. The source also claimed that North Korea executed its nuclear envoy to the United States, Kim Hyok Chol, as part of a purge of officials who steered negotiations for the collapsed summit in February.

© Sputnik / Iliya Pitalev
UN Opens up on Reports About Executions in North Korea
However, the official appeared alive during an amateur art performance by the wives of officers in the North Korean Army attended by Kim Jong Un and his wife, Ri Sol Ju, on Sunday. He was among 12 mentioned “leading officials” who accompanied the leader and his wife, according to KCNA on Monday.

After Chosun Ilbo reported that Kim Yong Chol was punished with hard labor following the Hanoi summit, here he is attending a performance by "KPA Officers' Wives" with Kim Jong Un in this KCNA photo pic.twitter.com/Un2v3m12OL

As Kim Jong Un’s point man for nuclear talks with the United States, Kim Yong Chol was apparently censured for the summit’s collapse by being removed from a key party post, a South Korean lawmaker said in April.

Kim Yong Chol was pictured standing behind Kim Jong Un in an official photo released from a session of North Korea’s rubber-stamp legislature in April, but did not accompany Kim on his summit with Russian President Vladimir Putin later that month. Officials who worked with Kim Yong Chol also have been out of the public eye since the summit, while diplomats who appeared to have been sidelined, including Vice Foreign Minister Choe Son Hui, have been seen returning to the spotlight.

When asked about the latest US contact with Kim Yong Chol and North Korea in general on Sunday, Pompeo declined to answer, saying: “We conduct our negotiations in private.”