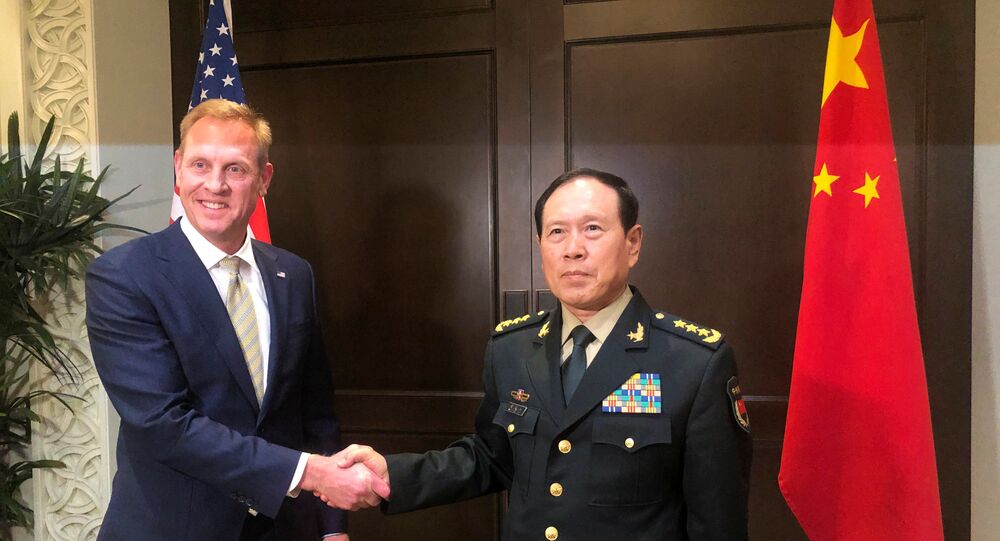 Acting US Defence Secretary Patrick Shanahan earlier in the day rejected China's claim that the continued militarisation of islands in the South China Sea is purely defensive, calling it overkill and excessive.

Chinese Defence Minister Wei Fenghe has expressed protest against the US’ Taiwan-related actions at a meeting with acting US Secretary of Defence Patrick M. Shanahan.

"Recently, the American side has made a number of statements and steps regarding Taiwan, which undermine the One China Principle. The Chinese side protests this", Wei said.

He stressed that the Chinese Armed Forces are firm in their determination to protect the sovereignty, security, and interests of China.

Wei Fenghe continued by saying that the US should not underestimate the determination of the Chinese side.

The statement comes after Shanahan earlier stated that building partnerships, deploying capabilities to the region, and assisting countries in developing their security capabilities are part of the US strategy to contain Beijing and achieve a free and open Indo-Pacific.

After the bilateral meeting in Singapore, China’s Defence Ministry spokesman Wu Qian told reporters that while the talks were constructive, Defence Minister Wei Fenghe had flagged the US words and actions over Taiwan as "unconstructive".

© Photo : Naval Sea Systems Command
US Navy to Run First Sea Trials of RAILGUN, Catching Up With China
The tense relations between the two countries have worsened over the last week since the US military reportedly sent two warships to sail though the Taiwan Strait in the South China Sea, with Doss saying that the transit demonstrated "the US commitment to a free and open Indo-Pacific". China issued a representation to the United States about the passing.

China claims the South China Sea as its sovereign territory and has built military bases on artificial islands there. The United States views the sea as an international waterway and routinely defies China with patrols by US and allied warships in so-called freedom of navigation exercises.