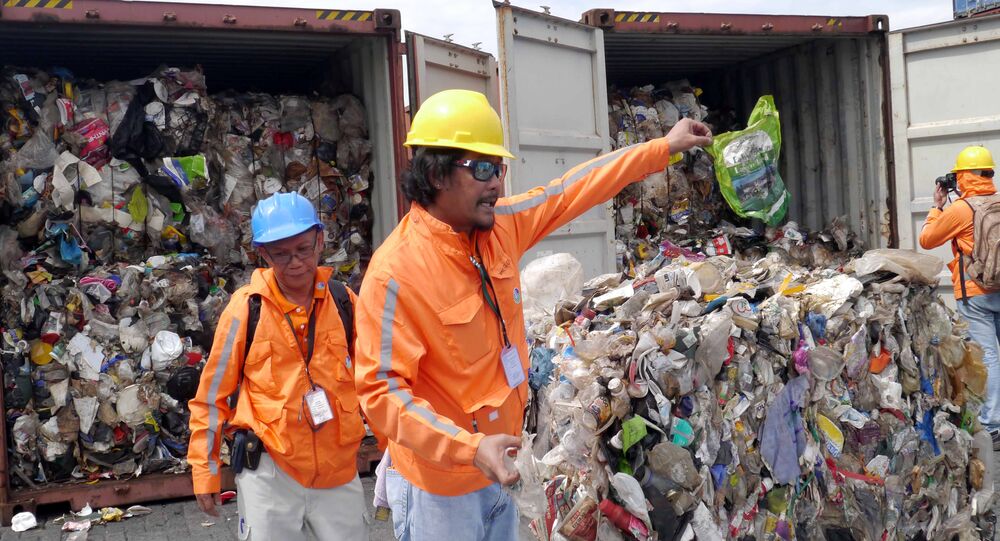 'Baaaaaaaaa Bye': Manila Succeeds in Sending Back Tonnes of Trash to Canada

Waste dumps have been a contentious issue in Manila-Ottawa bilateral ties for the past few years with Manila repeatedly urging the North American country to take back its trash falsely labelled as “recyclables”. Canada, however, turned a deaf ear to the calls for quite some time and even missed the latest deadline.

The Philippines has sent back tonnes of garbage exported by Canada, which has been the cause of a long-standing spat between Manila and Ottawa for years. Environmental activists have called for a wider permanent ban on trash imports from Australia and Hong Kong.

As many as 69 containers packed with 2,500 tonnes of household waste, including plastic bottles, bags, and used adult diapers that have been rotting away in ports in Manila for six years were loaded late on Thursday (30 May) onto the Bavaria, a 40,000-tonne, Liberia-registered container ship, set to sail via Kaohsiung, Taiwan all the way to Vancouver, its final destination,  the Straits Times reported.

“Baaaaaaaaa bye, as we say it… The garbage is gone, good riddance”, Foreign Secretary Teodoro Locsin tweeted, along with images of the vessel leaving. Canada has footed the shipping bill pegged at some $260,000.

“Get your flights back. Thanks, and sorry for the trouble you went through to drive home a point… This is the end of the matter… There’s more to garbage between us”, he added.

The garbage issue severely eroded the countries’ bilateral ties since Canada sent several batched of trash to the Philippines amounting to 103 containers back in 2013 and 2014. The contents of 34 containers have already been disposed of, while the issue as a whole remained unresolved.

All the containers were falsely declared by a private firm as recyclable plastic scrap, prompting Philippine officials to demand that Canada take back the remaining 69 items, with President Rodrigo Duterte lashing out at Canada in April threatening “a war against Canada”. The latter pledged to take measures to ship the waste back, however, failed to meet a 15 May deadline set by the other side, prompting the Philippines to recall its diplomats from Canada.

Duterte’s spokesman Salvador Panelo ratcheted up the pressure by saying Manila would ship the trash back on its own “immediately” and threatened to dump the waste in Canadian waters.

Meanwhile, early this month, over 200 tonnes of rubbish inside a 40ft container from Australia landed in Manila, while another shipment, improperly labelled as “assorted electronic accessories”, from Hong Kong, reached a port on Mindanao, in the southern Philippines.

Malaysia earlier announced it was sending back an overwhelming 450 tonnes of imported plastic waste back to its sources, including Australia, Bangladesh, Canada, China, Japan, Saudi Arabia, and the United States.

“Why do we need to repeatedly remind the world that we are not a garbage dump? Illegal waste dumping in developing countries should be stopped at all costs. We refuse to be treated as rich countries’ trash dumps”, Ms Abigail Aguilar, campaigner for Greenpeace Southeast Asia, asked rhetorically.

Locsin also dwelled on the issue earlier this year noting that a ban on waste imports will be in place, as long as Duterte, who prioritises environmental issues, is the country’s president.

China has faced the same issue for the past several years as well, receiving the bulk of scrap plastic from around the world. However, the world’s second biggest economy closed its doors to foreign waste last year in an effort to clean up its environment.