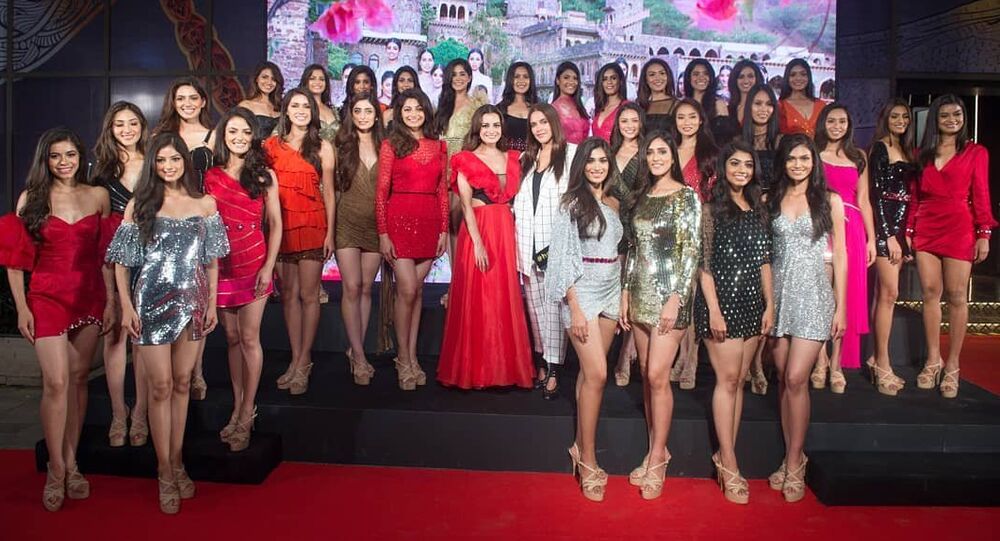 While many among the public picked up on the nation’s soft spot for fair skin and slim bodies, there were those suggesting that it is absolutely natural to be drawn to opposites and even make a cult of something one lacks.

This year’s Miss India finalists’ dazzling smiles appear to have faded quite a bit after a real storm followed over one circulating collage photo, which, critics claim, suggest that the organisers are obsessed with fair skin.

The pendulum started swinging when the Times of India, which is incidentally run by the same group of people that organises the landmark beauty pageant, published headshots of all 30 women competing in the contest.  Twitter user LeBrown James shared the collage, asking “What’s wrong with this picture?” prompting massive speculation about the event that earlier led Priyanka Chopra, among other top Indian celebrities, to a lucrative Bollywood career.

While many picked up on all the women having distinctly “fair skin”, one straightforwardly said: “This is so white!” referring to the finalists in the latest regional contests and who are now set to partake in the national finals next month.

Many brought up India’s famed first fairness cream, Fair and Lovely, the launch of which in the 1970s led skin whitening cosmetics to sell like hot cakes across the country, with many  showbiz and Bollywood personalities endorsing them in adverts and national TV commercials as means to get a dream job  or meet Mr. Right.

The public soon moved on from more concrete subject-centred comments to generalisations on what they claimed to be a lack of diversity and inclusiveness.

“They’re all fair toned women of colour, look almost the same and represent the idea of ‘ideal beauty’ in our country”, another quipped.

“Because competition is about beauty and this is what they consider as beautiful…” a different user pointed out, while another butted in by saying that the contestants are all “interchangeable”.

Many, however, seem to have a more measured and reconciliatory point of view, arguing it’s natural to be attracted to what is different from what you are used to:

What a shame as they look beautiful just the way they are! It is funny that those with fair skin seem to want to have bronzed skin and those often who have skin of colour want to have fair or light skin! What a strange old mad old world!:)

Different cultures, different concepts of beauty… we also tend to be attracted to what is different and rare from the crowds

One, meanwhile, suggested that India is “the most racist country in the world” given its “love of fair skin”:

Why can't a Miss India be a dusky or a dark brown or darker chocolate brown?

So much for the love of fair skin.

I sincerely believe we are the most racist country in the world…! pic.twitter.com/uvDMPKi6jZ

Same size as well. Cause one can't be #plussize and dare to dream of being Miss India. When are they going to end this obsession with fair and skinny? WHEN!!! https://t.co/6uJhZSv1Uw

Besides Chopra, who ultimately gritted out a win in Miss World in 2000, Miss India has served as a career launch pad for a number of other celebs, including Bollywood superstar Aishwarya Rai, who came runner-up and won Miss World in 1994.

Colourism was typical of India long before colonialism in the 1600s, when the social hierarchy was determined by caste division, with the wealthy, royals, and priests being at its stop and those with manual labour jobs eventually getting their hands tanned and brownish, being at the bottom.

After India obtained independence, there emerged a marked trend for fair skin, with the market for women’s fairness products expected to reach $716 million by 2023. In response to the rising backlash, back in 2014, the Advertising Standards Council of India issued a ruling that banned commercials depicting those of darker skin as “unattractive, unhappy, depressed or concerned”.