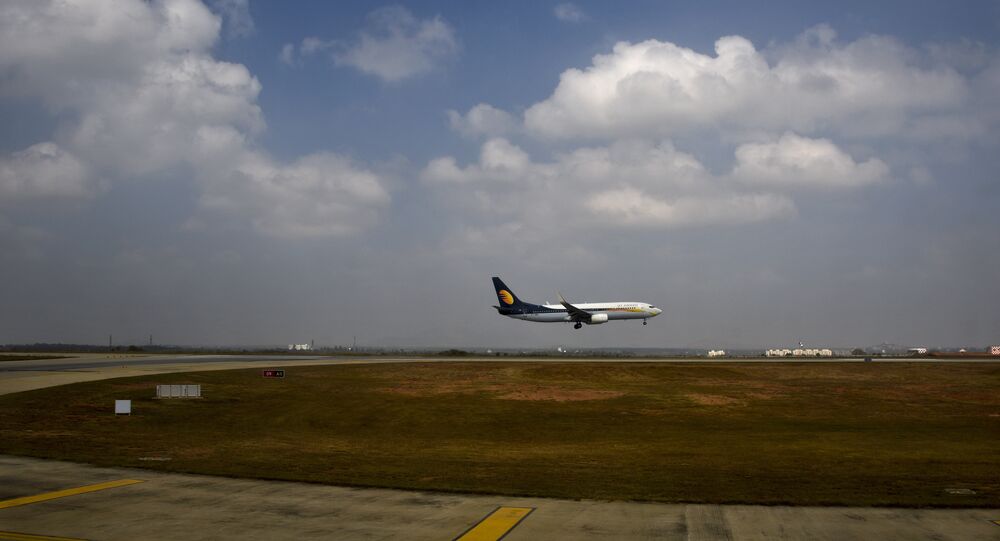 The manner in which a beleaguered Jet Airways promoter and ex-chairman made it beyond an immigration desk and into a Dubai-bound plane is fomenting conspiracy theories of crime abetment. Debt-ridden Jet Airways has ceased its operations worldwide due to a fund-crunch.

New Delhi (Sputnik): Social media users are debating with curiosity how well-known Indian business tycoon Naresh Goyal allegedly almost succeeded in fleeing the country, facilitated by a "misspell" in the Look-Out Circular (LOC) against him, issued at the behest of India’s Ministry of Corporate Affairs.

© AFP 2020 / INDRANIL MUKHERJEE
Lenders Take Over India's Ailing Jet Airways Amid Financial Woes
Goyal is the former chairman of the now bankrupt and debt-ridden full-service air carrier Jet Airways. He was caught by an alert immigration officer. In the LOC, his name had been spelled as "Goel" instead of "Goyal" as mentioned in his passport.

Some netizens were left with raised eyebrows at the incident, especially caused by a misspelling in the LOC. Many of them suspect foul play.

What if that misspell was deliberate? Brilliant presence of mind by the field officer.

Nice scoop… But kept thinking was there a conspiracy to misspell his name inn LOC so that he can abscond and then blame can be put on a clerical error.🤔🤔🤔

Could be a mischievous plan also. Looks like a deliberate attempt to fool the system.

This error cannot be a coincidence.

Somebody wanted him to escape😡who that could be? Any guesses?

Goyal and his wife Anita were en route to Dubai from Mumbai Airport on 25 May. They were deplaned when Goyal was recognised as such after the couple had cleared immigration because of a misspelling in the LOC.

What’s in a surname? Ask Naresh Goyal.Cleared immigration as the look-out circular spelt his surname as "Goel" instead of "Goyal." An alert official, recognizing him, checked with main office to find an LOC existed.Flight was recalled,Goyal deplaned.I rpt https://t.co/IOYulUGwQV

​Had Naresh Goyal been successful in his attempt to fly out of the country with a purported intention to flee, he would have been another to join the list of the absconding economic offenders, namely Lalit Modi, Vijay Mallya, and Nirav Modi, among others.