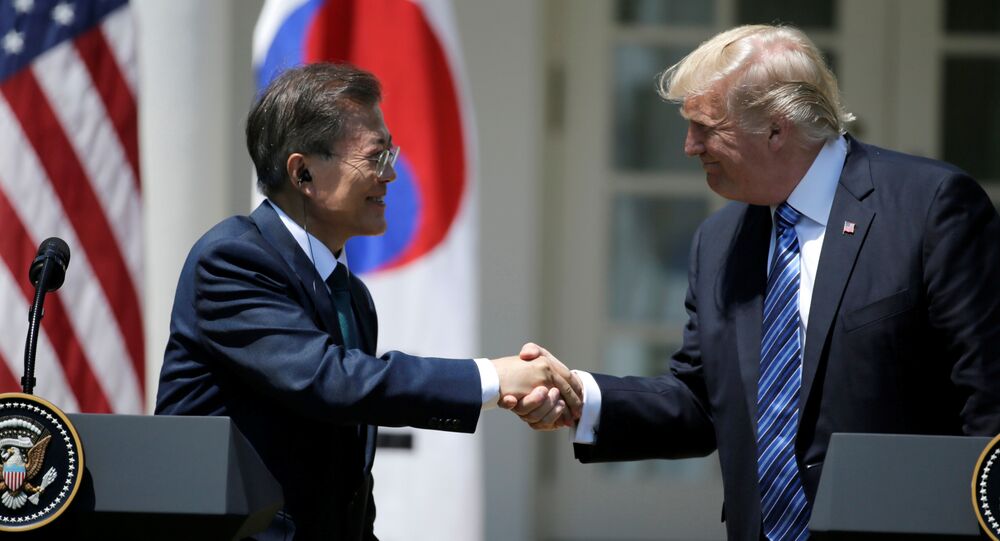 MOSCOW (Sputnik) - The South Korean Foreign Ministry is going to file a criminal complaint against one of its diplomats and a South Korean opposition lawmaker for leaking the details of the May 7 phone conversation between the South Korean and US presidents, the Yonhap news agency reported on Tuesday.

"Considering the gravity of the matter, we have decided to file the complaint against the official for leaking the classified information, and Rep. Khang for being the direct cause," the foreign ministry said in a statement to the media as quoted by Yonhap.

© REUTERS / Carlos Barria
Trump, Moon Discuss Establishing Post-Hanoi ‘Way Forward’ With N Korea - WH
The official, who worked at the South Korean Embassy in Washington, was accused of leaking the content of the talks between Moon Jae-in and Donald Trump to lawmaker Khang Hyo-shang from the opposition Liberty Korea Party (LKP), according to the agency.

The diplomat in question had no clearance to access confidential information, which can be accessed only by South Korean Ambassador Cho Yoon-je and several other senior South Korean officials, the agency noted.

He reportedly obtained the information from his colleague at the embassy, who is now also facing a reprimand.

In a statement released by his lawyer, the diplomat acknowledged the wrongdoing but said he had shared a confidential information at the insistence of Khang, who said he would use it only for a background reference, according to Yonhap.

White House spokesperson Judd Deere said in a statement on May 7 that the talks between Trump and Moon focused on recent developments regarding North Korea and ways to achieve its full denuclearization.