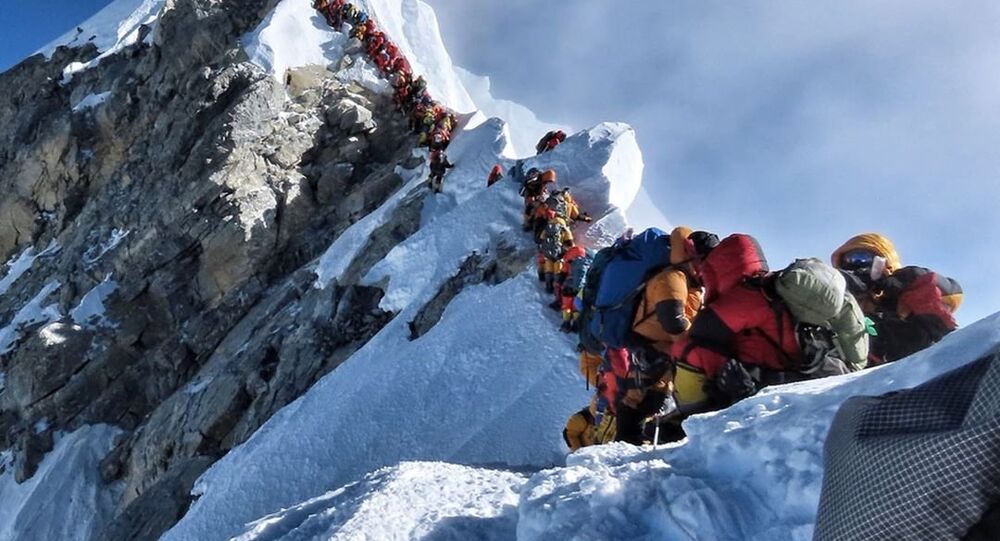 Chris Kulish, 62, of Boulder, died Monday while descending from the highest summit in the world, becoming the eleventh person to die climbing Mount Everest this year, his family confirmed in a statement.

Kulish, a lawyer and member of the "7 Summit Club," climbed Everest with a small group in "near ideal weather," according to his family. He died after returning to the camp below the peak.

Boulder attorney Chris Kulish becomes the 11th climber in 10 days to die on Mount Everest. His brother tells #KDVR he was on his way down when he died. This photo was taken about a month ago with Mt. Everest in the background. pic.twitter.com/XVdpttvFc0

The tenth person to die this year was 41-year-old British climber Robin Haynes Fisher, officials said. The death of another climber, 55-year-old Donald Lynn Cash of Utah, who fainted shortly after reaching the Everest peak due to altitude sickness, was reported last week. Both of these deaths were presumably connected to the overcrowded line to climb the top of the mounting, leaving the climbers in zones with low oxygen for a much longer period of time than recommended for safety.

On 22 nd of May, I summited everest at 5:30 am and lhotse 3:45 pm despite of the heavy traffic (roughly 320 people). Today I have just arrived at the Makalu base camp, I will be going for the summit push from the base camp directly.. Like it, tag it and share it if you love how the project possible 14/7 is rolling 🤙🏼. I will update more once I’m done with Makalu. Much love to all my supporters and sponsors. @antmiddleton @bremontwatches, DIGI2AL, @hamasteel, @summitoxygen Royal Hotel, Ad construction group, MTC/FSI, @everence.life @brandingscience Premier Insurance, OMNIRISC, Intergage @inmarsatglobal…. #nimsdai #believer #uksf #sbs🐸 #projectpossible #14peaks7months #persistence #humanendeavour #selfbelief #positivemindset #beliveinyourself #elitehimalayanadventures #alwaysalittlehigher

A record number of climbers have summited Mount Everest in April and May, the peak climbing months. Last week, there were reports of massive crowding, especially near Hillary Step, where climbers had to walk single file. On 22 May the Kathmandu Post reported that a record 200 had climbed up to the top in a single day.

This is the scene of Khumbu icefall on April 19, as several climbers were on their way up high camps for the first rotation. https://t.co/EC4O5w22Vf #Everest2019 pic.twitter.com/OWOxT3bqlF

This year has been the deadliest for climbers on Mount Everest since 2012, when 10 climbers died. All 11 deaths in 2019 occurred during peak climbing season. Officials have issued 367 permits to foreigners and another 14 to Nepalese mountaineers to climb Everest this year, according to a government liaison officer at base camp.

There are only five days when conditions were safe enough to climb to the summit, Alan Arnette, a mountaineering expert who runs a Mount Everest blog, told ABC News. Some climbers spent up to 20 hours above 8,000 meters due to a combination of exhaustion and wait times, Arnette said, with the average time ranging between 10 and 12 hours.